“Chewing a little” of the Italian Language 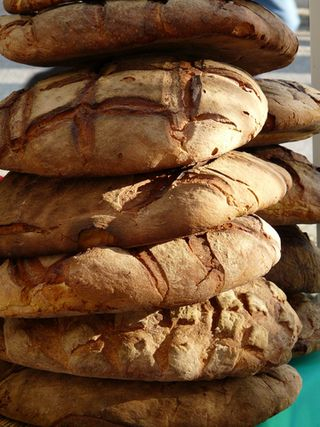 Remember the last time you took a bite of crusty bread and started to chew (masticare)? Can you think of a word specifically for this sound?  I can’t—in English, that is. In Tuscany I have discovered many.

Edmondo De Amicis (1846 –1908), a famed Italian novelist, journalist, poet, and short-story writer, once compiled a list of words that Florentines of the time, in their quest for linguistic precision, used to convey the crunching of bread between the teeth: croccare, scricchiolare, scricchiare, cantare, sgrigiolare, crocchiare, sgretolare, scricciolare, sgrigliolare, stridere, scrogiolare and sgriechiolare. The intellectual and critic Benedetto Croce (1866-1952) coined the word “toscaneggiare” (to make Tuscan) to mock such pretentiousness.

Although most of these words are no longer used (certainly not outside of Florence), you still want to masticare bene il cibo prima di ingoiarlo (chew food well before swallowing). And sometimes that means you have to masticare rumorosamente (chew noisily, chomp, crunch, munch).

Biasciare, a tasty morsel of a word, means to munch or chew with the gums. A piece of bread or paper or anything else you chew and then spit out, nameless in English, is called a biascicotto or biasciotto in Italian. Biascicatura sounds exactly like what it is: mumbling, as do biascia or bava, both words for slobber. Avere la bava alla bocca means to foam at the mouth.

An 18th-century Florentine writer defined the word berlingare as jabbering, chattering, or prattling on “when others have their gut full and their belly heated by wine…from this verb the Florentines  derive the names berlingaiuoli and berlingatori, which they call those who take delight in filling  their mouths, gobbling, and lapping.”  Florentines called the last Thursday of Carnevale (Fat Thursday in other regions) berlingaccio because “it seems that everyone is permitted to enjoy themselves, feasting and brawling, with gluttonous delights and delicacies.”

Masticare also can translate as mutter, grumble, or ponder something (as in chewing it over). If you know just enough of a language like Italian to mangle it, you could say you masticare un poco di italiano.

Some things are harder to chew—and swallow (ingoiare)—in any language. If you accept something very reluctantly and resentfully, you masticare amaro (chew bitter). Although you may not want to, at some point you might have to accept a grim reality and mandar giù un boccone amaro (send down, or swallow, a bitter pill).

In certain circumstances you may even have to eat crow, which translates in Italian as ingoiare il rospo (eat the toad).

masticare qualcosa –- to mumble something