Summer in the Italian Language: The Sea 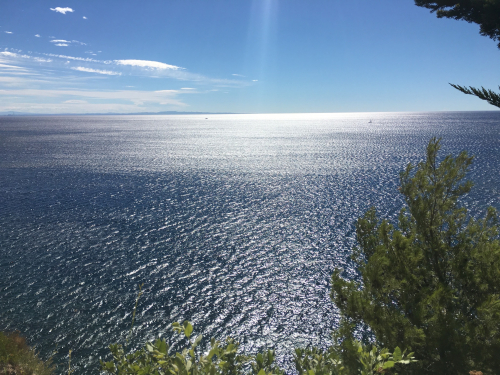 Gente di mare (mariners) in other parts of Italy, he explains, describe a  “rough” or “heavy” sea (mareggiata) as mosso.  But seafarers along the rocky peninsula of Monte Argentario say “C’è mare.”  Combined with a tug at the lower eyelid, the phrase implies,  “Watch out. Pay attention.”   You never know when you might  find yourself facing a sea of (un mare di) problems or ending up in the high sea (in alto mare)

There’s a lot to pay attention to when sailing il mar Tirreno (the Tyrrhenian sea), including la marea (the tide), which may be alta (high) or bassa (low). Most dangerous are i cavalloni (“white horses” or giant swells).

Even a lupo di mare (sea wolf or expert mariner) needs more than a bussola (compass) to navigate these waters. A guide for marinai (mariners) in the area warns of scogli isolati (scattered large rocks) that are poco visibili con mare mosso (barely visible in high seas).

Over the centuries many a boat has been shipwrecked (è naufragata) and crews and passengers drowned (annegati) in these treacherous waters.  On dark nights fari (lighthouses), white towers perched upon rocky points (punte), guide ships to safety. Once they were manned by human sentinels; now almost all are automated.

The sea has carved countless gulfs (golfi) and coves (cale) into the shores (rive) of the dramatic islands that make up the arcipelago toscano. Its waters shimmer in an array of hues, from the blu of the deep sea to lighter azzurro, pale verde mare (sea green) and brilliant smeraldo (emerald).   At its clearest and cleanest, il mare becomes limpido, an almost untranslatable word for water so transparent and pure that it feels like silk rolling over your body as you dive through its waves (onde).

Gettare in mare — to throw overboard