Excavating the Italian Language in Rome 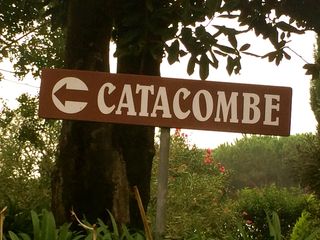 A nun at my Catholic grade school once regaled us with dramatic tales of early Christians in Rome hiding from persecutors in the underground tunnels called the catacombs. Not so, I learned on a recent City Wonders tour of Rome's catacombs and crypts. Le catacombe – derived from the Greek for “under” and the Latin for “cavity”–have always served as burial grounds.

My etymological dictionary defines a catacomba as a “complesso cimiteriale sotterraneo” (underground cemetery complex) in which “i primi cristiani” (the first Christians) buried their dead and “celebravano il loro culto” (celebrated their cult).

The ancient Romans, who cremated dead family members and kept their remains in urns, prohibited the burial of corpses within the city walls. Jews and followers of the “cult” of Christianity were forced to dig graves outside the Eternal City in the soft volcanic tufa rock along the major roads leading to Rome. From the second to the sixth centuries, they constructed some 375 miles of tomb-lined tunnels, creating a massive subterranean labyrinth with an estimated two million graves.

They also created some words that have survived to this day. One is dormitorio, the root of English’s dormitory. “It comes from dormo, or ‘I sleep,’” explained our knowledgeable  and engaging tour guide Mike Botula. “Early Christians believed that the dead were ‘resting’ until the Second Coming of Jesus Christ.”

A burial chamber was known as a cubicula (cubicle), a meaning that, as Mike quipped, wouldn’t surprise anyone who has ever worked in one. To let in fresh air, the diggers cut shafts called luminaria, somewhat like chimneys, that stretched up to the surface and “illuminated” three or four levels of underground graves.

As followers of a secret and forbidden religion, Christians relied on images and codes rather than words.

Still visible in the catacombs are colombe (doves), symbolizing the soul, and ancore (anchors), representing the cross. The Greek word “fish” appears often because it contains the first letters of the phrase “Jesus Christ, Son of God, Savior.”

After the invasion of barbarians from the North in the fifth century, the catacombs were abandoned and forgotten for almost a millennium. But Italian, which grew out of the vernacular or street Latin of ancient Rome, survived.

At another stop on the fascinating tour, I saw something I’d read about in my research for LA BELLA LINGUA but never before beheld: one of the earliest examples of written Italian words. They appear in an underground fresco in the basilica of San Clemente, a multi-level church that our guide Mike described as “archeological lasagna,” with various layers built atop each other. 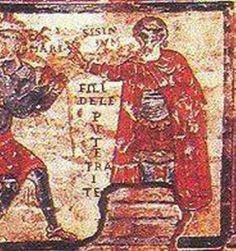 At some time in the eleventh century, an artist depicted a Roman pagan named Sisinnius, who sent his servants to capture St. Clement during his reign as Pope from 92 to 99 A.D. In the painting, Sisinnius, unaware that his men are dragging a stone column instead of Clement, yells at them in coarse street Italian: "Fili de le pute, traite! Gosmari, Albertel, traite! Falite dereto colo palo, Carvoncelle!" (Come on, you sons of bitches, pull! Come on, Gosmari, Albertello, pull! Carvoncello, give it to him from the back with the pole!")

The pontiff’s response in Latin appears in a cross-shaped inscription: "Duritiam cordis vestris, saxa trahere meruistis,"  which means "You deserved to drag stones due to the hardness of your hearts."

Dianne Hales is the author of MONA LISA: A Life Discovered and LA BELLA LINGUA: My Love Affair with Italian, the World's Most Enchanting Language.  Click here for more information on City Wonders tours.