January 20 marks the 100th birthday of the legendary director Federico Fellini. In a business built on dreams, he may have been the biggest dreamer of all. As a boy, Fellini  kept a sketch pad and colored pencils by his bed so he could record his vivid fantasies when he woke. His lifelong passion was transforming these nocturnal visions into stories to share with the world.

Fellini arrived in Rome in 1939 and began punching up scripts for movies at Cinecittà, the recently opened film studio. In 1942, he met a big-eyed gamine named Giulietta Masina, who had already established herself as a fine stage actor. They married in October 1943, on the eve of the Nazi occupation of Rome. After the war, Fellini sketched caricatures for American GIs, penned gags for comedians, drafted radio plays, and contributed to the scripts for the iconic neorealistic films Roma, città aperta and Paisà. 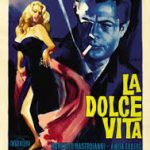 Some critics have compared Fellini’s best known film,  La dolce vita, to Dante’s Inferno. Like the fourteenth-century pilgrim, the errant journalist Marcello wanders through a corrupt world teeming with memorable characters—120 named in the script—to emerge into the light of day. But Fellini’s voyager, unlike Dante’s, finds neither radiant stars nor any hope of salvation. Many Italians responded with outrage to Fellini’s torrid depiction of Roman decadence.

“These polemics fill me with sorrow,” the director said. “I’m a storyteller. I’ve told a fable, a fable of our times. . . I intended for it to be a document, not a documentary.” Six decades later La dolce vita remains a cinematic masterpiece, a marvel of images, sounds, motion, and light.

After the firestorm over La dolce vita, Fellini entered Jungian analysis and began sketching his dreams for his therapist, as he once did as a child. These fantastical images became the basis for the movie he called Otto e mezzo (8½), since it came after seven full-length features and two short ones. Many viewers were hopelessly confused, but this didn’t faze Fellini.

“Either a film has something to say to you or it hasn’t,” he remarked. “If you’re moved by it, you don’t need it explained to you. If not, no explanation can make you be moved by it.”  Otto e mezzo won the Academy Award for Best Foreign Language Film, the third for Fellini.

Fellini and his wife stored their many prizes in a room they called the “Sanctuary of Divine Love”—but never entered. For them, the joy of bringing fantasies and characters to life mattered more. Within months of receiving an honorary Oscar for lifetime achievement in 1993, Fellini suffered a stroke, fell into a coma, and died. Some 70,000  mourners filed past his casket in Cinecittà to pay their respects.

“There is no beginning; there is no end,” the beloved maestro once wrote. “There is only the infinite passion of life.”

Celebrations of Fellini’s centennial include exhibits in his hometown of Rimini as well as screenings and special events around the world.