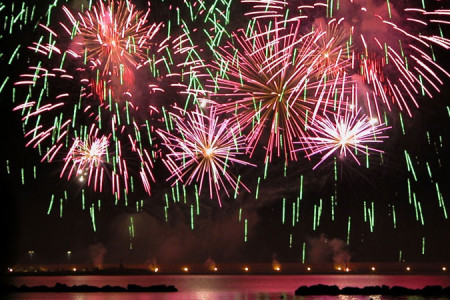 Years ago I celebrated my first Italian Ferragosto in Capri,  a most fitting (though crowded) place to be on August 15. The Roman emperor Augustus so enjoyed late summer that he claimed as his own the month we now call by his name.

Augustus ordered month-long festivities, called feriae augustus, which included games, races and rituals to honor the goddess Diana, who was worshiped as queen of the fields as well as of heaven and earth. Augustus was equally enamored with the beguiling island of Capri, which he appropriated from the municipality of Naples in exchange for the nearby island of Ischia.

With the rise of Christianity and the suppression of pagan feasts, August 15 became a religious holiday commemorating the assumption or lifting into heaven of Mary, the mother of Jesus.  Over the centuries various communities developed special ways of honoring the Madonna.  In the Sardinian town of Sassari,  for instance, men carrying elaborately decorated wood columns dance through the streets.

Messina’s townspeople construct La Vara, a fantastic sixty-foot-high pyramid from which stars, clouds and figures of saints dangle. At one time young boys dressed as angels and apostles were hoisted into the air by rings attached to La Vara. As part of the ceremonies a young girl representing the Virgin Mary freed a prisoner.

According to a Neapolitan legend, local fishermen once pulled a portrait of the Madonna from the sea, and their king ordered a church built around it at the beach.  On August 15, which became known as the Festa della Nzegna, everyone was tossed into the water. The night before the faithful ate only watermelon, but the next day they feasted on sumptuous desserts.

Times have changed. Now a national holiday, Ferragosto marks the height of the Italian vacation season. In cities and towns many restaurants and shops close.  The term “ferragosto in città” describes, not just the emptied towns, but any bleak or unhappy situation. As millions flock to the beaches, seaside villages host daylong festivities that often end with spectacular displays of  fireworks (fuochi d’artificio).

The summer celebrations continue throughout August, including:

*A three-week festival with costumes, processions and music to celebrate La Fuga del Bove (The Escape of the Ox) in Montefalco in Tuscany.

Andare in ferie — go on holiday

Click below to witness the excitement of Siena's Palio:

← Summer in the Italian Language: Falling Stars "Venice Addicts" on the City They Love →
FOLLOW BY RSS