Fire in the Italian Language 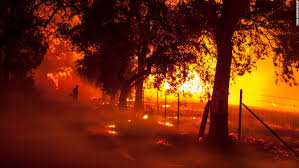 From Paradise to Inferno

“Che paradiso!” Italian friends often say when they visit the coast and grape-growing regions north of San Francisco.  Those of us who live in Sonoma and Napa counties agree—and feel lucky to make our homes amid such beauty.  However, we have learned how quickly a paradise can turn into an inferno.

The fires (gli incendi) broke out in the middle of the night. The initial spark (la scintilla iniziale) may have come from a power line (una linea elettrica) knocked down by strong winds (forti venti) that quickly spread the flames (le fiamme). With no warning, families had to flee in the dark, often with just the clothes they were wearing.

The wildfires (incendi incontrollati) have since claimed at least forty two lives. Many victims were elderly (anziani), unable to escape the fast-moving flames. Almost 100,000 people were evacuated from fire zones. More than 221,000 acres (quasi 90,000 ettari) have burned, and almost 6,000 homes and structures (le case e le strutture) were destroyed.

California’s wine country (la regione dei vini della California) is known throughout the world for its vineyards and wines (conosciuta in tutto il mondo per i suoi vigneti e i suoi vini).  Several wineries (aziende vinicole) and their cellars (cantine) were burned; others were spared.  No one yet knows how the environmental damage (danno ambientale) may affect the region’s vines (vite) and wine harvest (vendemmia).

The smoke from the fires (il fumo degli incendi) created the worst air quality (la peggiore qualità dell’aria) ever recorded in the San Francisco Bay Area. According to some reports, air pollution (l’inquinamento atmosferico) reached levels as high as those in the most polluted cities in China.

Governor Jerry  Brown described the fire  as  “one of the greatest tragedies California has ever confronted” (una delle più grandi tragedie che la California ha mai affrontato).  As an Italian newspaper put it, the fire emergency (l’emergenza incendi) has brought a large part of the state “in ginocchio” (to its knees).

As always, the worst of times has brought out the best in people. The heroes of the day are the “first responders” (primi soccorritori) including more than 10,000 fire fighters (vigili del fuoco) who have worked around the clock to battle the blaze. Communities throughout the region set up shelters for the evacuees (gli sfollati) and provided food, clothing, beds and other forms of assistance (soccorso).

The blazes (roghi) continue to smolder, although the fire brigades (i pompiere) have gained control.  Many evacuees are returning to their homes.  Those whose homes or businesses were burnt to ashes (ridotti in cenere) are beginning the long, slow process of rebuilding.  We are all trying to help each other (aiutarci l’uno l’altro),  knowing that, if we work together, our earthly paradise will not be lost forever (perso per sempre).

Domare un incendio –- get a fire under control