A Postcard from Florence, Cradle of the Italian Language 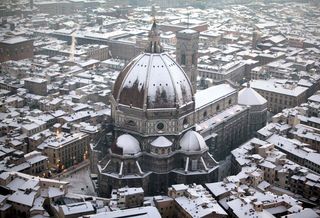 Florence’s cathedral, Santa Maria del Fiore, is one of the most recognizable churches in the world. People often assume that “Il Duomo”—as it’s called—translates as “the dome.” But “duomo,” from the Latin domus for home, means house of God.

It took the Florentines several centuries, a sizeable fortune and strokes of architectural genius to build this heavenly home — "a structure so immense,” a historian wrote in the 15th century, “so steeply rising toward the sky, that it covers all Tuscans with its shadow.”

Towering over the roofs of Florence, visible from miles away, Il Duomo ("sotto neve" or under snow in this recent photo) stands out at the ultimate masterpiece in a city of masterpieces. Upon completion of its crowning cupola, the townspeople proudly began introducing themselves with the phrase, “Io son fiorentino del Cupolone” (“I am a Florentine of the Big Dome”). However, the basilica of “St. Mary of the Flower” (symbol of Florence) is grand in ways that go beyond sheer immensity.

Florence’s town fathers decided to build a new cathedral in the last decades of the 13th century to accommodate the city’s surging population—and to surpass in size and grandeur the churches of rival city-states Siena and Pisa. The first stone was laid in 1296, and the huge nave and chapels were finished in the early 1400s.

The design called for a cupola bigger than any the world had seen. But no one could figure out how to build it. For more than half a century rain and snow fell through a 143-foot hole in the ceiling. Finally Filippo Brunelleschi came up with a dome-within-a-dome plan based on the design of the Pantheon, the architectural wonder of ancient Rome.

Construction of Brunelleschi’s dome began in 1418 and continued until 1436. Time and again, faced with a seemingly insurmountable difficulty, Brunelleschi invented something entirely new: a hoist, a crane, even a way of installing stoves on the dome so his workers could eat well without wasting valuable time descending to the street. (He reportedly watered their wine to keep them sober.)

The original façade was the collective design of several 16th-century artists, but the unfinished work was eventually dismantled. The exterior remained bare until the 1870s, when the current façade was constructed primarily of white marble from Carrara, green from Prato and pinkish red from Siena in a design that harmonized with the existing patterns of the Baptistery and Campanile.

The most striking impression upon entering the cathedral, the largest in Europe at the time of its completion, is its vastness. The two-aisled nave measures 502 feet in length and 295 feet in width. Designed to hold congregations as large as 20,000 people, the basilica can feel empty and bare even with tour groups congregating at different meeting places. This starkness reflects the austere spiritual ideals of Florence in the Middle Ages and early Renaissance.

Brunelleschi’s dome, which weighs 37,000 tons, required some 4 million bricks. Built without a supporting wooden framework (unthinkable at the time). the construction inspired awe among the Florentines, who quoted a line from Dante’s Divine Comedy — de giro in giro, circle by circle — as they beheld its soul-stirring ascent into the Tuscan sky.

To appreciate just how big the dome is — 142 feet in diameter, 300 feet high — climb the 463 steps between its two vaults to the narrow gallery above the cathedral (8-Euro fee). Just avoid the dizzying mistake I made: Don’t look down.