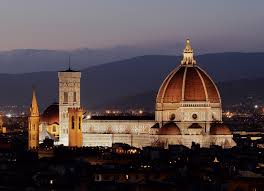 Six hundred years ago, in 1420,  construction began on one of the world’s architectural marvels: the long-unfinished dome of Florence’s Cathedral of Santa Maria del Fiore. Winning the commission for this task proved almost as challenging as the work itself for Filippo Brunelleschi, a goldsmith, engineer and architect.

Brunelleschi argued so fervently and relentlessly for the job that at one point the “Greal Council,” which consisted of guild leaders, appointed trustees and consultants, had the volatile “ass and babbler,” as one called him, forcibly thrown into the street as if he were a lunatic. He complained that he was afraid to walk through Florence for fear of hearing people say, “Look! There goes the madman.”

When the project trustees demanded that Brunelleschi reveal the technical details of his plans, he responded with an egg. Whoever could make it stand on end, he contended, should win the contract to build the dome. When all his rivals failed, Brunelleschi took the egg, cracked its bottom on a table and made it stand upright.

His competitors argued that they could have done the same thing because it was so obvious. That, Brunelleschi countered, was why he refused to show them his blueprints before the assignment was his. “By a vote taken with beans,” as the art historian Vasari described it, the trustees named Brunelleschi the Duomo’s capomaestro, or principal master builder.

In essence, Brunelleschi’s design consisted of two concentric domes, an inner one concealed inside an outer one. Tension rings of stone, iron and wood, similar to hoops on a barrel,  wrapped the walls and prevented cracking or collapsing.

Time and again, faced with other seemingly insurmountable challenges, Brunelleschi invented something entirely new: a hoist, a crane, even a way of installing stoves on the dome so his workers could eat well without wasting valuable time descending to the street. (He reportedly watered their wine to keep them sober.) The townspeople quoted a phrase from Dante’s Paradiso–“de giro in giro,” circle by circle—as they beheld the dome’s soul-stirring ascent into the Tuscan sky.

The cathedral was finished and consecrated in 1436—140 years after construction began in 1296. After its completion the citizens  of Florence began introducing themselves with the proud words, “Io son fiorentino del Cupolone.” “I am a Florentine of the Big Dome.”

To appreciate just how big Brunelleschi’s dome is–142 feet in diameter, 300 feet high–climb the 463 steep steps between its two vaults to the narrow gallery above the cathedral. But avoid the dizzying mistake I made: Don’t look down.