Getting Old in the Italian Language 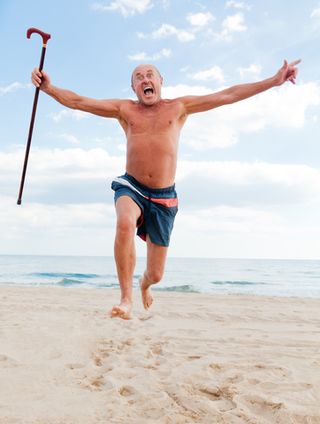 Even getting old—invecchiare— sounds better in Italian. Or perhaps Italians simply enjoy la terza etá (the third part of one’s life), the  equivalent of our “golden years,”  more.

Arturo Licata is living proof. The 111-year-old former miner (minatore) has become the longest living man in the world (l'uomo più longevo nel mondo). Asked for the secret of his longevity, l’anziano (the elder or senior) replied, “Cantare e sorridere” (singing and smiling).

Born in Sicily in 1902 (classe 1902, as Italians put it), Licata, who had four brothers (quattro fratelli) and two sisters (due sorelle), went to work in the mines (in miniera) at age nine. As a teen he did military service (il servizio militare) in Bari then returned to his hometown of Enna.

For sixty years, he worked as a miner, often walking some 22 chilometri (kilometers) a day from his home.
"Non esistevano le automobili” (Cars didn’t exist), he explains. Licata and his wife had seven children, one of whom died at a young age. At age 78, he lost his spouse, his “compagna e alleata di una vita felice” (his partner and ally in a happy life).

Il canto (singing) has been Licata's lifelong passion. His daughter, who cares for him, reports that she often hears him singing in the middle of the day, both in Italian and in Sicilian dialect (sia in italiano che in dialetto siciliano). Unfortunately, Licata, who has lost his sight (la vista), has had to give up his beloved guitar (la chitarra amata), which he once strummed every day after dinner.

Licata’s credits a healthy lifestyle (una vita sana e regolare) for his good health.
In the evening he always goes to bed on a regular schedule (un orario regolare). “Mai insonnia” (never insomnia), says Licata, who usually sleeps until nine in the morning. "Perché no?" (Why not?) he asks. “Non ho impegni di lavoro” (I don’t have any work commitments).

Licata’s sense of humor (senso dell’umorismo) may be one reason he has never suffered “una malattia importante” (a major disease), nor has he struggled with ansie o depressioni (anxiety or depression).
His son describes his papà sempreverde (ageless or evergreen father)—il nonno di sette nipoti (the grandfather of seven)–as having always lived “con il sorriso” (with a smile).

Occasionally Licata experiences gli acciacchi della vecchiaia (the aches of old age), including a certain pain in his knees (un certo dolorino alle ginocchia). But he reacts with typical good humor.
“Pazienza!" (patience),  he says, “Passerà" (it will pass).

A tavola non s'invecchia mai (one never grows old at table), Italians say. It certainly seems that il vecchierello (the good old man) has spent his hours at the table well.

i miei vecchi –- my old folks or parents

ospizio dei vecchi / ospizio per anziani –- home for the aged