Guest Blog: Growing Up Bilingual in Italian and English 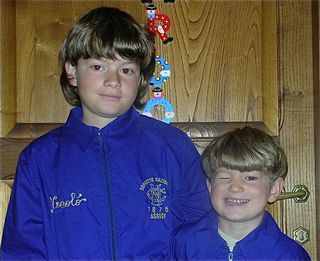 I fell in love with the bel paese during a high school foreign exchange summer in Umbria in 1986, when I met my future husband and began tripping through my first words in Italian. In 1993, after college, I moved to Italy from Chicago and opened an agriturismo in my husband’s renovated family farmhouse at the foot of Mount Subasio near Assisi. I spend my time taking care of guests at Brigolante and of our two sons — Nicolò, nine, and Leonardo, “five going on six.”

Raising bilingual and/or bicultural kids crystalizes the poignant truth about how much children belong to you and how much — how excruciatingly, heart-breakingly, humblingly much — they do not. We use OPOL (One Person One Language) in our house, which is a rather inelegant way of saying that I speak English to our sons and my husband speaks Italian.

Almost simultaneously with putting together their first phrases, my children understood grammar. They would often say “I raccont-ed (Italian for told) a story” or “they sposa themselves” (get married). From these linguistic mash-ups, I realized that toddlers—yes, toddlers–already understand the concept of adding a suffix to a verb in English to communicate the past tense and how a reflexive verb works in Italian.

Young children also understand the concept of language as a meta experience. When my older son was just learning his first words, I instructed him in English to say thank you to the butcher. He turned and said, “Grazie!” He already understood that two distinct languages with separate vocabularies needed to be spoken appropriately to two distinct groups of people.

As a parent I’ve come to realize how much of conversation is not a two-way street, even if you are speaking directly to a second person. For example, when I ask my son — in Italian — in front of his aunt if he has thanked her for the birthday gift, I’m not so much prompting him as communicating to her, “Listen, if he hasn’t said thank you, it’s not because I’m a bad parent who doesn’t know how to teach manners!” If I announce — in Italian — during a play date, “If you don’t keep it down, there will be no ice cream!” I am getting it across to all present that ice cream is on the line, even if you’re not my kid so I can’t scold you directly.

Every family has a private language, laced with inside jokes and references, invented words, and lots of baggage. A bilingual family’s patois is more intricate and exclusive. I end my children’s names in the endearment mou, which is a relic from my Greek heritage. My husband calls them boccia, a word in the disappearing Umbrian dialect for young boy — how he himself was addressed growing up.

As they grow, my sons’ two languages will fully form and separate, and our little private island with its crazy patchwork of words stitched together with the threads of history and family and culture will slowly vanish. But right now we speak one common language in our house – the language of love. And we all capisce (understand) ourselves, as my sons would say.

Rebecca blogs about the lovely region she calls home at Rebecca’s Ruminations and wonders what strange winds blew an urban vegetarian to a pig farm in Umbria.