Hooray for “H” in the Italian Language! 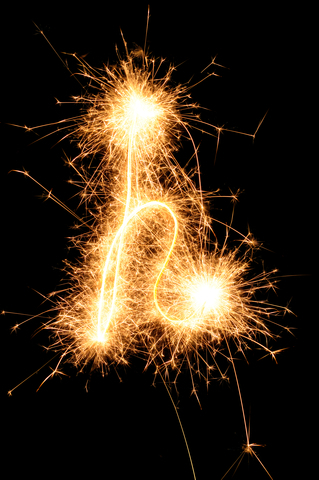 H
acca
“H,” the eighth letter of the Italian language, is called “acca” but makes no sound. This “voiceless consonant,” as my dictionary describes it, is used as the initial letter only in four forms of the verb avere (to have): ho (I have), pronounced “oh”; hai (you have), pronounced “aye”; ha (he or she has), pronounced “ah”; and  hanno (they have), pronounced “ahn-no”
The humble Italian “h” appears after the consonants “c” and “g” before the vowels “e” and “i” to harden their sounds—very different from English pronunciation. Ci (with multiple meanings, including here, there and us) is pronounced “chee,” while chi (who) sounds like “key.”
Many “h” words have migrated untouched into Italian, including harem, hamster, happening, hardware, helium, and homeland. Others take on Italian embellishments, as in hollywoodiano, defined in 1955 as “di Hollywood, centro dell’industria cinematografica Americana” (of Hollywood, the center of the American cinematographic industry) and in 1965 as “sfarzoso, spettacoloso” (sumptuous, spectacular).  Then there's the Italian asino (donkey), who  brays “hi ho!” rather than "hee-haw."
The very fact that “h” carries so little significance in Italian inspired some popular sayings: Non capisco un acca  translates as "I don’t understand an 'h'"–or, less literally, "I don't have a clue." Non vale un’acca  means "It's not worth an "h"–or has no value. Yet even the unassuming acca deserves some respect, as we learn from a delightful children's story.
"C'era una volta un'Acca." (Once upon a time there was an H), begins  "Un Acca in Fuga" ("An H in Flight") by Gianni Rodari. The other letters taunted her, saying: "Lo sai o non lo sai che nessuno ti pronuncia?" (Do you know or don't you know that no one pronounces you?)
The Acca, angered by such teasing, runs away, and terrible things happen:
*le chiese (the churches), without an H, crollano (collapse).
*i chioschi (the kiosks), become so light that they volano (fly) through the air scattering giornali (newspapers) everywhere.
*i cherubini (the cherubim), for whom taking away the Acca was like taking away their wings, cadono (fall) from the sky.
*le chiavi (the keys) cannot aprire le porte (open the doors) so people must sleep outdoors.
*le chitarre (the guitars) lose tutte le corde (all their chords) and cannot make music.
*il Chianti, without the Acca, takes on un sapore disgustoso (disgusting taste), and i bicchieri (the glasses), becoming "biccieri," shatter into mille pezzi (thousands of pieces).
*Not a single rooster (gallo) can fare chicchirichi (go cockle-doodle-do) in the morning.
The Acca, with no passport (passaporto), is found  trying to sneak across the border to Austria. Everyone begs her not to leave. The desperate citizens of Chiavari even offer her una villa al mare (a seaside villa).
The Acca, who has un buon cuore (good heart), agrees to stay — to the great relief of the words chiacchierare (to chat) and chicchessia (whoever) and of all who need occhiali (eyeglasses) to see da qui a li (from here to there).
"Hallelujah!"  I say.  Without the Acca, we Hales would dwindle into "ales"!
Words and Expressions
The unpronounced “h” makes appearances in many everyday expressions, including:
Ahi! – oh dear!
Ahimè! Ohimè! – alas!
Eh! – ah! well!
Oh! – oh! ah!
Ohibò! – for shame!
Dianne Hales is the author of LA BELLA LINGUA: My Love Affair with Italian, the World's Most Enchanting Language and MONA LISA: A Life Discovered.
Click below to listen to a charming reading of "The Acca in Fuga":
FOLLOW BY RSS