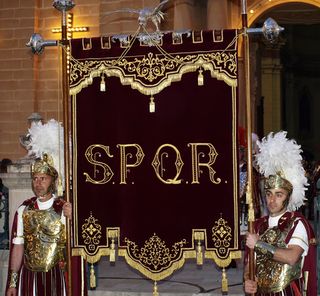 Founded in 753 B.C., Rome marks its 2,771st birthday on April 21.  If you’re in the city this weekend,  check out the special festivities, which typically  include  concerts, gladiator displays, a parade and  fireworks. If I could be there, I’d head for the oldest part of Rome: the Palatine hill, named for the goddess Pales, patroness of shepherds—and the oldest part of Rome.

In the eighth century B.C., in the kingdom of Alba Longa on the Tiber, a jealous younger brother overthrew his reigning sibling. To block any rivals, he killed his nephews and consigned his  niece Rhea Silvia to a temple to the goddess Vesta, where a vow of chastity would prevent her from conceiving an heir. Mars, the lusty god of war, overturned this plan.   Overcome with desire, Mars swooped from the heavens and left the beguiling virgin "rich with twins.”

When Rhea Silva gave birth to two boys of uncommon beauty and size, the angry monarch ordered them drowned.  A  slave placed them in a basket in the Tiber that  washed ashore at the foot of what is now the Palatine Hill. According to legend, a lupa (she-wolf) suckled the twins Romulus and Remus. However, their nursemaid may well have been human since lupa was slang for prostitute. During ongoing excavations on the Palatine hill, archaeologists discovered what could be the original lupercale, the cave that sheltered the twins and that later served as a shrine for their worship.

After the boys grew to maturity, they overthrew their evil uncle and decided to build a new town on the banks of the Tiber. In a violent argument, Romulus killed his brother Remus. Taking command, Romulus gave his name to the settlement that would grow into a great empire.

Over the centuries the Palatine hill, with its tranquil setting and splendid views, attracted rich and powerful residents. Octavian, later adopted by Julius Caesar, was born on this sacred site in 63 B.C. When the Senate proclaimed him Augustus, Rome's first emperor, he built a house near the small structure known as Romulus's hut. His successors, the emperors Tiberius, Caligula and Claudius, lived in much grander homes atop the Palatine. Visitors to these mansions called them palazzi—the root of the word for "palatial" residences in French (palais), Spanish (palla) and English (palace).

Rome changed everything, bringing civilization—laws, roads, urban planning, public works, even indoor plumbing–to an untamed world.  The imprint of the Roman empire remains on everything from coins to monuments, tombs to temples. The manhole covers of Rome are still emblazoned with S.P.Q.R., the Latin abbreviaton for the Senatus Populusque Romanus, the senate and people of Rome. Italians joke that it really stands for "Sono pazzi questi romani." (These Romans are crazy.)

Alla romana — to go Dutch or split the bill

Paese che vai, usanza che trovi –- When in Rome, do as the Romans do. (Literally, the country that you go to, the customs that you find.)

Who can resist this classic ode to Rome?