Honoring a Landmark of the Italian Language 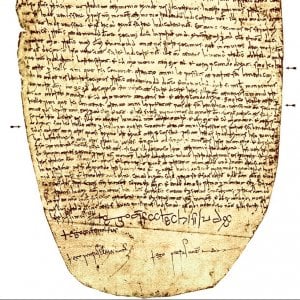 After more than a thousand years, the Placito di Capua, one of the monuments in the history of the Italian language, is receiving some long-overdue recognition: a cippo (a pillar with an inscription) in the town where it was created in the year 960, Italian’s designated birth year (anno di nascita).

The feisty vernacular (volgare) or street Latin of ancient Rome had emerged slowly over the previous centuries — in battle accounts, business ledgers, crusaders’ letters home and an occasional serious musing on science or philosophy. But the first official document (il primo documento ufficiale) to include the volgare didn’t appear until a court settled a property dispute between the monks of the famed Benedictine monastery at Monte Cassino in central Italy and a neighbor who had filed a claim for a plot of adjacent land.

After the official Latin summary of the case, the three judges repeated the verdict, granting the land to the monks on the basis of prior possession. Once Italian students memorized the historic words each judge scrawled in his own hand (sulla propria mano) in a language that was no longer Latin but has not yet become Italian:

I know that the abbey of St. Benedict possessed these lands, within the borders to which this refers, for 30 years.

The first time that my Italian tutor in Florence saw the original document, displayed in a special exhibit at the Uffizi, tears flooded her eyes. “Ero molto emozionata!” (I was very excited!) she recalls. When she unfurled a copy before me, I could understand why. In the crude lettering  of the three judges, you can sense a linguistic embryo stirring to life.

The Placito di Capua marked a sea change (cambiamento radicale) for Italian. For the first time the people of the peninsula clearly realized they were speaking a language distinct from Latin. This vernacular came to be known as lingua materna, the mother tongue, while Latin, which students had to go to school to learn, was called la grammatica.

Although Latin retained its monopoly on scholarship, law, medicine and religious studies, higher education itself inspired words in the vernacular, such as università (first defined as a corporation and later as a body of students), facoltà (faculty) and lezione (lecture).

The official cippo was inaugurated in a special ceremony last week in the piazza where the buildings of the Court and the Tribunale dei Principi longobardi (Hall of Justice of the Longobard Princes) stand. Here is the official epigraph beneath the quoted judgment, with a translation:

Dictated by the judges Arechisi

Pronounced under oath by the three witnesses

Recorded in the judicial act

Brought to the light of history

The language of Latin ancestry

Spoken in this part of Italy

A precursor of the future Italian Language

To which I can only add: Viva la lingua italiana!

Dianne Hales is the author of La Bella Lingua: My Love Affair with Italian, the World’s Most Enchanting Language and Mona Lisa: My Life Discovered.