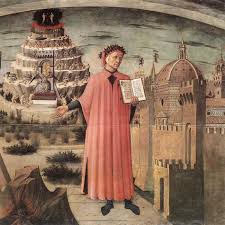 This year the Settimana della lingua italiana nel mondo (week of the Italian language in the world), from October 18 to 23, celebrates “Dante, l’Italiano.“ It is a fitting tribute during the 700th commemoration of  the poet’s death in 1321.

Born in Florence in September, 1265, Dante Alighieri lost his mother at an early age and  endured an unhappy childhood. As a boy, he swooned over a lovely girl named Beatrice whom he first saw in a local chapel. Despite Dante’s undying crush, the two rarely met and barely spoke. Both wed others in marriages arranged by their families. Dante’s wife bore him several children, but  Beatrice remained his only muse.

Drawn to Florence’s raucous political life, Dante served as one of the town’s priors, or city councilmen. In 1301 civil war ripped Florence apart.  In Rome on a papal mission, Dante escaped the bloodbath by his political foes but faced trumped-up charges of misuse of public funds.   If he ever were to return, he would be burned at the stake.

Everything Dante had worked for disappeared overnight. At age 36, he was penniless, friendless, powerless, homeless—as he put it, “a ship without sails or rudder, driven to various harbors and shores by the parching wind that blows from pinching poverty.” He would remain an exile for the rest of his life.

Around 1307 Dante began work on a literary tour-de-force of 14,233 eleven-syllable lines organized into 100 cantos in three volumes: Inferno, Purgatorio, and Paradiso.  Refining his Tuscan vernacular into a rich literary language, Dante portrayed a fantastic universe that stretched from the depths of hell to the heights of heaven.

La Commedia (a publisher in Venice added “Divina” later) begins on Good Friday in the year 1300. “The pilgrim,” his first-person narrator, loses his way in a dark wood, travels deep into the earth, and enters a funnel-shaped hell with nine concentric circles spiraling down into an icy center.

In this abyss of darkness and fright,  the pilgrim sees and mentions by name 128 sinners, meets 30 monsters, takes two hair-raising boat rides, faints twice, and witnesses the damned being whipped, bitten, crucified, burned, butchered, deformed by repulsive diseases, transformed into shrubs and snakes, buried alive in flaming graves, skewered into rocky ground, frozen in ice, and immersed in mud, excrement, boiling blood, or pitch. The pilgrim manages to escape from Hell, then slogs through Purgatory before Beatrice raises him through the spheres of Paradise.

The Inferno, which began to circulate around 1313,  was an instant sensation. Throughout Italy people gathered in the central piazza of towns and villages for readings of the Divine Comedy. Peasants memorized melodic lines and shared them as they worked the fields.

With this epic, Dante spun Tuscany’s lusty, lively vernacular—the people’s tongue—into literary gold: a gleaming new language second to none in its power and profundity, the linguistic base of modern Italian.

More than seven centuries after the bard’s birth, Bruce Springsteen, Patti Smith, and bands like Radiohead and Nirvana have cited Dante as an inspiration. They join an exalted chorus of famous fans, including William Shakespeare, John Milton, William Butler Yeats, James Joyce, Samuel Beckett, and Ezra Pound. No other single piece of literature has generated more research, analysis, commentary, interpretations, or adaptations.

“Vive Dante!” proclaim graffiti in the streets of Florence. Dante lives! His words certainly do. Long may we honor the linguistic legacy that has enriched our lives and literature.