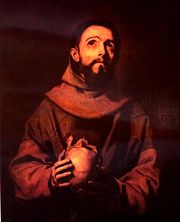 October 4 marks the feast of St. Francis, born Giovanni di Pietro di Bernardone in 1182, the son of a prosperous textile merchant in Assisi.  The ringleader of a band of hard-drinking, carousing young men who delighted “in practical jokes, in pranks, in tomfoolery, in idle talk and gossip,” as his first biographer put it, seemed an unlikely candidate to become Italy’s patron saint.

When Perugia and Assisi faced off in one of their frequent clashes, the twenty-year-old playboy, yearning for chivalric glory, volunteered for the fray. Captured by enemy troops, Francesco was tossed into a squalid underground cell in Perugia for a year before his father could arrange a ransom.

The traumatic experience shattered his health and transformed the callow youth. Francesco went off to meditate and pray in the dilapidated chapel of San Damiano in Assisi. One day he heard the figure of Christ on the crucifix above the altar instruct him to “repair my house, which you see is in ruins.”

Francesco, taking the instructions literally, hauled bales of precious cloth from his father’s shop to a nearby market town to sell and tried to give the proceeds to the pastor. His incensed father charged his son with theft. At a public hearing, Francesco turned over the money—along with every stitch of clothing he was wearing. As the naked youth explained, from that moment he had only a heavenly father.

Francesco also took a “bride,” Lady Poverty, and called himself Poverello (Poor Little One). Renouncing all earthly possessions, he formed a band of “begging brothers,” who preached a gospel of love and peace. Even animals responded to Francesco’s empathy. Once  he approached a fearsome wolf terrorizing the town of Gubbio. When the beast lunged at him, Francesco entreated him not to eat “Brother Ass” (as he referred to his body). The wolf, curling up at his feet, wordlessly conveyed a promise not to attack the townspeople, who provided food for the animal at the gates of their city for the rest of its life.

Despite debilitating illnesses, Francesco delighted in being a child of the universe. His rapturous Canticle of the Creatures praises with unbridled wonder Master Sun, Sister Moon, Brother Wind, Sister Water, and Brother Fire. Francesco’s lyrical verses transformed his spiritual passion into the first major literary work in the still-evolving Italian language.

Francesco’s health deteriorated over two decades of preaching and fasting. At age 44, emaciated and racked with pain, he lay dying. Those keeping vigil reported that at the moment of Francesco’s death, larks sang and flew in circles above his beloved humble church,  the Porziuncola. This chapel, infused with centuries of heartfelt pleas, remains one of my favorite places to kneel and reflect.

“Your prayers will be answered,” a kindly friar told me on my most recent visit.

“I know,” he said, explaining that when God asked what he would like in return for his devoted service, Francesco requested only that those who come to this chapel and “pray with a devout heart will obtain what they ask.” My prayers for a friend with breast cancer were indeed answered—for which I remain grateful to St. Francis, God, and the state-of-the-science care she received.