How Love Became the Most Hated Word in the Italian Language 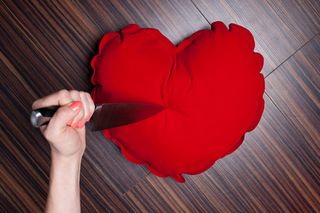 You won’t find  "lovvare” in your Italian-English Dictionary. Not now. Not yet. And if many Italians have their say, not ever.

A popular television comedy and its adolescent audience get the credit—or blame–for transforming the sweet and simple English word “love” into the Italian-sounding lovvare, conjugated like other verbs ending in “are”: I love – lovvo, you love – lovvi, he or she loves – lovva, we love – lovviamo, you (plural) love – lovvate, they love – lovvano.

Despite the positive sentiment it expresses, lovvare has triggered so much antipathy that it ranked as la parola più odiata (the most hated word) on the Internet and in social media in 2013, according a poll conducted by the Italian edition of Vanity Fair.

Lovvare, according to the respondents. provoca un fastidio quasi fisico (provokes an almost physical discomfort), anche se usata con ironia, vera o presunta (even when used with irony, actual or presumed). In an online comment, an Italian declared, “Odio questa specie di ‘verbo’ e odio chi parla così” (I hate this type of 'verb' and I hate those who speak this way.)

Another such verb, “trollare,” which, nel gergo di internet (in internet slang), refers to the activity of a trouble-making “troll”– una persona che interagisce con gli altri utenti (a person who upsets or interferes with other users) by means of messaggi provocatori, irritanti, fuori tema o semplicemente senza senso (messages that are provocative, irritating, off-topic, or simply without sense).

Other English imports also rank among the reviled: outfit, storytelling, target, engagement, digital, social. They offend, not for their significance, but for muscling aside perfectly respectable Italian words such as abbigliamento (or tenuta), raccontare, obiettivo, impegno, digitale and sociale.

Another example, “fallire” in Italian, is so similar to “fail” that it’s hard to understand why Italians would opt for the English—although the most hated form of “epic fail” doesn’t quite translate into Italian.

The same is true for “foodie,” substituted for old and colorful Italian words for a food lover, such as goloso, ghiottone and bongustaio. A “start-up” seems so intrinsically American that I can understand the preference for the English—although not a reason for hating the term.

I can make a similar case for “big data,” which has an entirely different connotation than grandi dati. There’s no such defense for “addicted,” increasingly used instead of dipendente, as in video-dipendente, droga-dipendente (drug addict)  or amore dipendente (love addict).

A journalist commenting on the list recalls una volta che le parole erano neutre (a time when words were neutral), seen solely as gli strumenti “social” che utilizziamo tutti i giorni (social instruments that we use every day). The responsibility to rispettarle, amarle, usarle correttamente (respect them, love them, use them correctly) is ours.

“Le parole sono innocenti (words are innocent),” the acclaimed author Umberto Eco once wrote, “we are the ones who, usandole senza fantasia (using them without imagination), le rendiamo odiose (render them hateful). And yet there is nothing amabile (lovable) about una parola finta (a fake word) like lovvare that gives amore a bad name.

performante –- from “performance,” meaning performing well or efficient, used instead of Italian equivalents such efficace, efficiente, or valido.

Dianne Hales is the author of LA BELLA LINGUA: My Love Affair with Italian, the World's Most Enchangint Language and the upcoming MONA LISA: A Life Discovered.