“I” Is for Isola in the Italian language 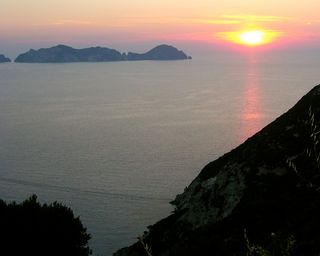 Every island seems both familiar and foreign. Its natives speak with undiluted accents, often in a dialect practically unchanged for centuries. Its specialties are made with same-day-fresh ingredients (ingredienti), spiced with herbs (erbe aromatiche) that may not grow anywhere else. Its liqueurs, whether made with lemons, oranges or almonds (limoni, arance o mandorle), always seem to capture the island’s unique blend of sun and salt air.

Every island also has its own storia (history and story). According to one, as the goddess Venus emerged from the waves of the Tyrrhenian sea, seven gemstones fell from her tiara, and turned into the seven islands of the Tuscan archipelago: Elba, Giglio, Capraia, Gorgona, Pianosa, Giannutri and Montecristo.

Sicily, Italy’s largest island, takes its name from a mythic princess with almond eyes and mahogany skin. In a time before time Destino (Destiny), wrapped in a black cape, appeared at the castello of a king and queen. All the people in their kingdom would perish, he warned—unless they sacrificed beautiful Sicilia. When they entreated him to spare their daughter, he agreed—but only if she left her homeland forever.

On her fifteenth birthday Sicilia, dressed in a white gown and crown of jasmine, was pushed out to sea in a small boat. After days with only the sun, moon, wind and stars as her companions, she landed on a white beach in a land of flowers and fruit trees.

Suddenly a prince appeared, the sole survivor of a plague that had killed his parents and people. Destiny had brought him to this place to await the beauty who would become his wife. Their many children filled their island kingdom with joy.

Sardinia, Italy's second-largest island, boasts a rich mix of local customs (costumi locali) and cultures dating back to 1500 B.C. With a turbulent history of invasion and conquest, the rugged island served as a sanctuary for pirates and bandits (pirati e briganti). I long to return just to swim in its acqua chiarissima (clearest water) and savor treats such as the gatto’, a confection of almonds and sugar in the shape of a church.

“No man is an island,” wrote the poet John Donne. Nessun uomo è un’ isola. But in Italy, every man and woman can find an island, learn its storia, and write a chapter (scrivere un capitolo) of their own.

Click below to listen to the unique sound of Sardinia's canto a tenore: