Fishing in the Italian Language 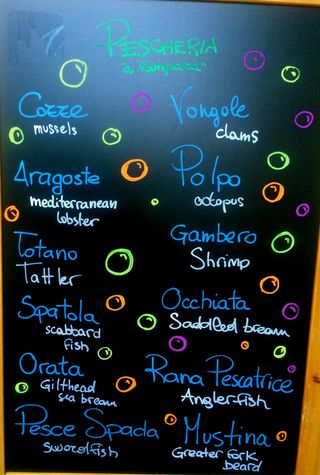 At least once a week I visit the fresh fish stores in Bodega Bay on the north California coast, to buy crab (granchio), salmon (salmone), mussels (cozze), shrimp (gamberi) or clams (vongole). But I'd never encountered some of the fish names we spotted at a local pescheria in Lipari in the Aeolian Islands:

*Mustina — greater fork beard (this remains a mystery to me)

Some days we didn't have to dock at a port and head for the nearest pescivendolo (fishmonger) to check out his pescata (catch). Once we happened upon a  pescatore (fisherman) fishing for aragoste (lobsters) from his peschereccio (fishing boat).  Antonino, who did double-duty as captain and chef, cooked up a just-caught specimen for a delicious dinner.

While on board, we learned the names for a fishing line (lenza), net (rete), rod (canna da pesca), bait (esca) and tackle (equipaggiamento per la pesca). But you don’t need a pole and bait to go fishing in Italian. Il pesce swims through daily life—and language.

An Italian is sano come un pesce (healthy as a fish, rather than an ox). A big shot is un pesce grosso (big fish). But be wary: I pesci grossi mangiano i piccini. (The big fish eat the small fry.)

Buttarsi a pesce (literally, throw yourself like a fish) means to dive into an activity headfirst or with enthusiasm. Non sapere che pesci pigliare (not know which fish to catch) refers to being at a loss and not knowing which way to turn.

Rather than the early bird catching the worm, in Italian chi dorme non piglia pesci (he who sleeps doesn’t catch the fish).  But in Italy, as everywhere, “L’ospite è come il pesce; dopo tre giorni puzza.” (A guest is like a fish; after three days it stinks.)

*Trattare a pesci in faccia — to mistreat, to humiliate, to mortify

*Prendere un granchio — to take a crab (make a blunder, overshoot the mark)

Dianne Hales is the author of Mona Lisa: A Life Discovered and the New York Times best-selling La Bella Lingua: My Love Affair with Italian, the World's Most Enchanting Language.