Inside Italy’s Convents, Monasteries and Abbeys

My thanks to Silvia Bascelli for this guest blog on a largely unknown aspect of Italy's culture and history: 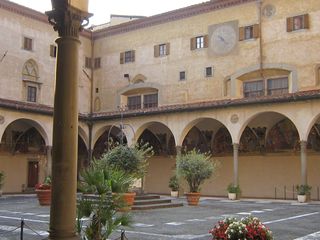 The panorama of Italian architecture, both in cities and in the countryside, includes convents, monasteries, abbeys and charter houses (i conventi, i monasteri, le abbazie e le certose). These are the residences of people who live in religious communities: friars, monks and nuns (i frati, i monaci e le suore), organized into "orders” (ordini). The phenomenon, which came to be called monasticism (monachesimo), was widespread both in the Roman Catholic and Orthodox churches.

Monasticism emerged around 500 AD. Driven by a strong vocation (una forte vocazione), some of the faithful separated from the rest of the community to live a purer life (vivere una vita più  pura) and to get closer to God (avvicinarsi a Dio). This was also a kind of protest against the corruption (la corruzione) of the customs of the time and of the church itself.

Created by men and women of strong personality and religiosity (forte personalità e religiosità), each order lived under its "rule” (regola), that is, the precepts established by the founder. All the rules stipulated, among other obligations, that of living in chastity (vivere in castità).

Some orders, such as the Carthusians, led a contemplative life (vita contemplativa), almost entirely devoted to prayer (la preghiera) and work, normally agricultural (il lavoro, normalmente agricolo).One of the best known, perhaps also the first (forse il primo), is the order of Benedictines, founded by St. Benedict. Its Latin motto was "Ora et labora” '(Pray and work). The famous abbey of Montecassino, built by Saint Benedict, was destroyed by bombs during the Second World and then rebuilt exactly as before.

The monastic institutions (istituzioni monastiche), especially those of the Benedictines, proved invaluable during the barbarian invasions (le invasioni barbariche), when they managed to preserve civilization and culture (la civiltà e la cultura).  Handwriting (la scrittura) itself had all but disappeared. Only thanks to the patient work of monastic scribes (amanuensi) was writing saved and newly diffused in society.

The monastic libraries also saved thousands of ancient books with all of the knowledge that had been transmitted (tutto il sapere che ci era stato trasmesso) in their pages. The popular novel, The Name of the Rose (Il nome della rosa), was set in one of these monasteries.

Today vocations (le vocazioni) have declined or almost disappeared (quasi scomparse) in Western nations, and in Italy as elsewhere there are very many empty convents (conventi vuoti). This is especially true in Rome, where the presence of the pope (la presenza del papa) had led to the building of many religious residences. Many empty convents and monasteries have been converted into residential hotels (strutture alberghiere). As a result, it is possible to find in Rome accomodations at reduced price (prezzi ridotti). The small rooms of the friars and sisters are certainly less luxurious (meno lussuose) than those in hotels, but they are clean (pulite), cost less (costano meno) and, above all. are almost always in the center of the city (nel centro della città).

The abandoned abbeys and chart houses located in the countryside have often been converted into museums that are open to the public (al pubblico). One of the greatest in the world (più grandi del mondo) is la Certosa di Padula. If you can’t visit it personally, check out this link.

A special treat for visitors to some monasteries is the  heavenly sound of monks chanting: