Italian-Americans and their Stories in the Italian Language

As many as 26 million Americans claim some Italian ancestry (origini italiane). In the greatest surge of immigration, between 1880 and 1920, some four million Italians left their fatherland (patria) for the United States. About 80 percent came from the impoverished south of Italy (Sud Italia), mainly from Sicily, Campania, Abruzzo, and Calabria.

Italians and their descendants (gli italiani e i loro discendenti) helped shape the modern United States of America and were shaped by it in turn. Most of the new citizens (cittadini) began their American lives as unskilled manual workers (operai or manovali) in factories, mines, and farms. Over time their children moved into managerial, professional, and white collar (carriere di tipo manageriale, altamente qualificato o impiegatizio).

Italian-Americans have succeeded in all fields of endeavor (campi di attività), including sports (lo sport), the arts (le belle arti), politics (la politica), and the media (i media).
Some Italian Americans — such as Joe DiMaggio, Geraldine Ferraro, Mario Cuomo, Al Pacino, and Madonna — became famous. Others, less well known (meno conosciuti), have made significant contributions, such as Federico Faggin, who developed the first micro-chip, and Robert Gallo, whose research identified a cancer-causing virus.

One of the joys of promoting LA BELLA LINGUA has been meeting Italian Americans and hearing the stories of how they or their parents came to America.   Antonio Rosso arrived in the United States in 1951 all by himself at age ten, with not a word of English (senza conoscere una parola d’inglese) and his pockets stuffed with salami and provolone (tasche piene di salame e provolone).

As he and his daughter Tonya Hamilton recount in their heart-warming new book, Wrestling with the Devil (Lottando contro il diavolo), little Antonio expects to find trees blossoming with gold (alberi dai fiori d’oro). Instead he confronts obstacle after obstacle—demons (demoni), as he calls them.

In time Antonio makes his way to Portland and an aunt and uncle (zia e zio) who welcome him like a son of their own (come fosse un loro figlio) — and give him an all-American cowboy shirt and holster (above). His family eventually manages to immigrate from their home town of Roccarainola near Naples (below). 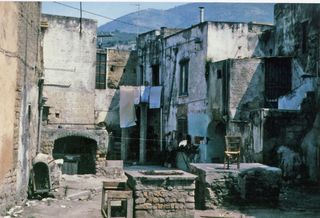 Antonio struggles to find his way until he discovers that he has a natural instinct and ability in the sport of wrestling (una predisposizione e un talento naturali per la lotta olimpica).
This passion (questa passione) leads him to success at Arizona State University and a career as a wrestling coach. It also helps him realize values deeply rooted in the “Old World” (Vecchio Mondo), above all the importance of family, discipline, and hard work (l'importanza della famiglia, della disciplina e del duro lavoro).

The motto that sustained him—“Obstacles cannot crush me” (Gli ostacoli non mi piegano)—may sum up the attitude of millions of other Italian-Americans who came to the United States to create a better way of living (per creare una vita migliore) for themselves and their chlldren.

For more information on Wrestling with the Devil and other books about Italy, Italians, and the Italian American experience, go to Gemelli Press.

Click below for a fascinating documentary on Italian Americans: