Italian Culture: The Birth of the Renaissance 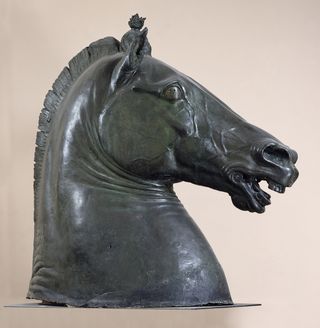 The Springtime of the Renaissance

If you’re in Florence this summer or Paris this fall, don’t miss a spectacular exhibit on La Primavera del Rinascimento, "The Springtime of the Renaissance: Sculpture and the Arts in Florence, 1400-1460."  A joint venture organized by the Fondazione Palazzo Strozzi and Musée du Louvre, the show traces the origins of the “miracolo del Rinascimento” (the miracle of the Renaissance) through 137 sculptures, paintings, and ceramics from museums and private collections in the United States and Europe.

Among the masterworks on display are the bronze panels depicting “The Sacrifice of Isaac” that Ghiberti and Brunelleschi created for the 1401 competition for the commission to produce a set of doors for the Florence Battistero (Baptistry). Ghiberti won, but Brunelleschi went on to construct the most dazzling of early Renaissance achievements. His cupola for the Duomo, or Cathedral of Santa Maria del Fiore, towered above the skies (“erta sopra e’
cieli”), as Leon Battista Alberti, a leading proponent of umanesimo (humanism), wrote, ample enough to cover the entire Tuscan population with its shadow (“ampla da coprire chon sua ombra tutti e popoli toscani”).

The humanists conceived of Florence, the artistic capital (capitale artistica) of the Renaissance, as a new Rome or Athens, albeit a devoutly Christian one. Sculpture (la scultura) was the first of the major arts to embody the classical style of the Quattrocento (1400s). The city’s arti (guilds) commissioned large-scale statues that combined ancient models (modelli antichi) with expressive and technical innovation (rinnovamento espressivo e tecnico).

The superstar sculptor of the show is Donatello, christened Donato but so lovable that his family’s fond diminutive nickname stuck. His gilded bronze San Ludovico di Toloso (St. Louis of Toulouse) was restored specially for the exhibit. The saint's staff is ornamented with miniature putti, or spiritelli, naked winged "spirits" based on ancient Roman cupids. Donatello also produced the show's most dramatic work (above), a monumental bronze horse's head, the sole surviving element of an unfinished equestrian statue (statua equestre).

While sculptors used color to increase their works’ expressive value (il valore expressivo), painters (pittori) such as Masaccio and Uccello strove to create a heroic, “statuesque” effect in “pittura scolpita” (sculpted painting). Another great revolution (grande rivoluzione) came with advances in the study of perspective (prospettiva) and the portrayal of spatial depth (profondità spaziale).

My favorite room presents variations on one of the most popular themes of the times: the Madonna with Child (la Madonna col Bambino), as depicted by the greatest Florentine artists (dai maggiori artisti fiorentini). Particularly stunning are Luca della Robbia’s shimmering enamels, a manifestazione luminosa del divino (a shining manifestation of the divine), which rivaled the preciousness of marble and bronze to achieve extraordinary success (straordinario successo). 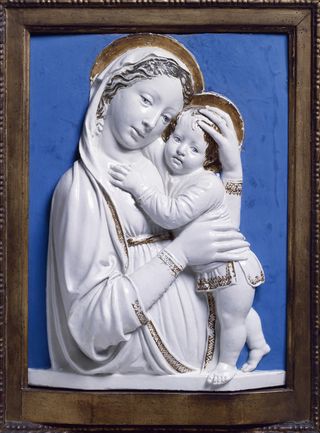 With la fioritura rinascimentale (the flowering of the Renaissance) in the Cinquecento (1500s), la diffusione della bellezza (the spread of beauty) continued.

“The Springtime of the Renaissance” will be at the Palazzo Strozzi in Florence until August 18 before moving to the Louvre in Paris from September 23 until January 6, 2014. You can find a virtual tour by scrolling through the "Exhibition Walkthrough" at the website.

l’alba del Rinascimento -– the dawn of the Renaissance

Dianne Hales is the author of LA BELLA LINGUA: My Love Affair with Italian, the World's Most Enchanting Language. Click here for more information on her "writer's studio" in Capri this fall.

← Italian for Travelers: At the Market An Independence Day Bridge in the Italian Language →
FOLLOW BY RSS