Celebrating the 18th Week of the Italian Language in the World 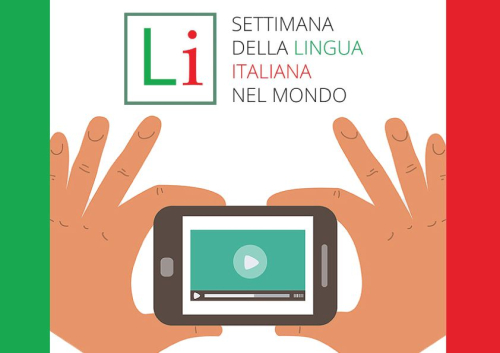 The Week of the Italian Language in the World

This week marks the eighteenth annual settimana della lingua italiana nel mondo, a global celebration of la bella lingua. Italy’s Ministry of Foreign Affairs and International Cooperation and the Accademia della Crusca launched the initiative in 2001, with a different theme delving into an aspect of language and culture every year.

The theme for 2018 is “L’Italiano e la rete, le reti per l’italiano,” (Italian and the web, social networks for Italian).  Italian language schools and cultural centers around the world are sponsoring conferences, presentations, and special events. Click here for links to programs in several cities in the United States.

In her presentation for students at Georgetown University and the University of Maryland, the distinguished linguist Valeria Della Valle, a professoressa at the University of Rome La Sapienza and author of best-selling popular books on Italian, summarizes the language’s long history from Dante to the digital age.

“Although almost 700 years have passed since Dante Alighieri's death in 1321, 80 percent of the words of modern and contemporary Italian were already in use at that time,” Della Valle notes, “If we consider the fundamental vocabulary of modern Italian–that is, the set of 2,000 very widespread words that make up 90 percent of spoken and written communication–over 1,600 of these 2,000 words appear in Dante’s Divina Commedia.”

Thanks to Dante and other Italian wordsmiths, such as Petrarch and Boccaccio, Italian has survived as a language with strong literary roots. However, it also has continued to evolve. In the twentieth century, largely through the influence of film and television, the majority of Italians, who had long talked with each other in regional dialects, began speaking standard Italian, the national language.

Today one of the topics most debated by the Italian media concerns damage — real or alleged — to the Italian language by the Internet and social media. “Many fear that what we call ‘smilies,’ that is, emoticons and emojis, will replace words,” Della Valle observes. “Some even talk about ‘a new Italian’ or a ‘liquid writing’ to underscore the fact that texts are no longer entrusted to a solid support (as was the case for centuries, when words were written on stone, parchment or paper) but to a support that is not entirely material or solid and that has made writing (and reading) lose certain characteristics.”

Italians generally have divided into two camps on this issue. One group argues that the Internet is killing Italian and cites as evidence abbreviations commonly used in texts (SMS), such as “6” for sei (also translated as “you are”) and pome for pomeriggio (afternoon). But, as Della Valle points out, speakers of all languages crunch words in texts and tweets for brevity’s sake.

Other scholars view the advent of the Internet and social media as a great opportunity for the Italian language. “The new technologies,” Della Valle suggests, “have perhaps created the conditions for creating a model of a new Italian that is informal and closer to the spoken word. In fact, it could be a stimulus to the evolution of Italian, to make it richer and more dynamic.”

Personally, I have no fears for the fate of a language that has survived invasions, ruthless inquisitors, foreign tyrants, strutting dictators, corrupt politicians, the European Union, ubiquitous English and tourist hordes. Italian was born of an insatiable hunger to express, communicate and connect. Nothing and no one can quench this urge.

Dianne Hales is the author of MONA LISA: A Life Discovered and LA BELLA LINGUA: My Love Affair with Italian, the World's Most Entrancing Language. Click here to preorder her upcoming book, LA PASSIONE: How Italy Seduced the World.