Italian-to-Go: Driving in the Italian Language 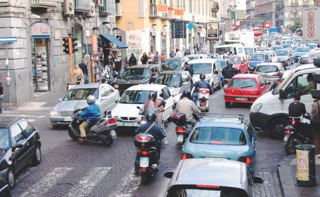 “Why don’t people stop?” I asked a taxi driver in Naples as we saw car after car passare col rosso (run a red light). He shrugged his shoulders and explained that in Italy traffic lights are “optional.” So, it seems, are designated lanes, speed limits, and parking under signs declaring that it’s forbidden (divieto di sosta).

Cruising around in a car (girare/andare in macchina) is a great way to see the Italian countryside, but the more Italian car talk that you know before mettere in moto (starting the engine), the better your odds of getting to your destination safely.

Of course, you’ll need to stop regularly at a gas station (benzinaio or distributore di benzina) to fill up the tank (fare il pieno). Many are “self-service,” with signs saying “Fai da te” (Do it yourself). Check if you need to buy unleaded gas (benzina verde), regular (normale), super (super) or diesel (gasolio).

Perhaps because speeding is so common, Italian has a lot of ways to describe fast driving:

*andare come una scheggia (go like a piece of scrapnel)

*andare a tutto gas, a tutta birra  or a tavoletta (go full-throttle)

Sooner or later even a pilota automobilistico (race car driver) has to arrestarsi con uno stridio di gomme (screech to a halt). If you get stuck behind a lumaca (snail) or an autista della domenica (Sunday or slow driver), resist the temptation to effettuare un sorpasso azzardato (make a daring pass). Watch out for a pirata della strada (road hog) who tries to tagliare la strada (cut the road or cut you off).

If you find yourself in una coda interminabile (bumper-to-bumper traffic), you may want to fare un’inversione a U (make a U turn) and find an alternate route. Above all you want to avoid an incidente stradale (car accident), whether it’s uno schianto in autostrada (crash on the highway), un tamponamento a catena (a chain crash or pileup) or un tamponamento (a fender bender). You certainly don’t want to fracassare (wreck) or sfasciare/distruggere la macchina (total one’s car) or end up with il colpo della strega (the whip of the witch —  whiplash).

If you are going to mettersi al volante (get behind the wheel) in Italy, my advice is, “Guida piano!” (Drive slowly!) (Click here to listen to a lovely song to listen to as you drive: "Guido Piano.") As the saying goes, “Chi va piano, va sano e va lontano.” He who goes slowly goes sound (as in safe and…) and goes far.

Scarrozzare –- to drive someone/something around, to chauffeur

Fare retromarcia –- to back up, reverse