I am happy to present a guest blog from a British
reader, Ainsley Okoro: 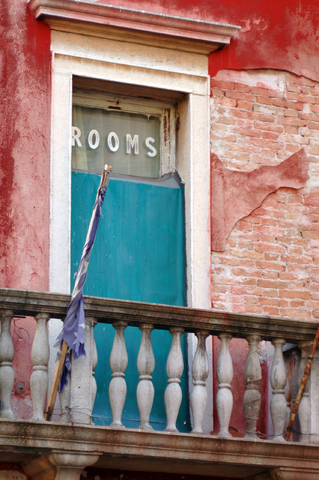 Brits don’t do foreign languages very well. (Perhaps
that’s why we spent centuries forcing large parts of the world to speak ours.)  So as an Englishman of a certain age,
the four years I spent learning Italian weren’t smooth sailing.

The low points? How about the time I tried to ask a
waitress in Forte dei Marmi, Tuscany, about leaving la mancia (the tip) on the table
but instead asked her what to do about la minchia (a crude term for
the  male sex organ). And don’t get
me started on one of my first meetings with my future mother-in-law, when I
confused ho scoperto (I discovered) with ho scopato (which can translate as
“swept” or a very vulgar term for sex).

Yet sometimes I wonder why I went to the bother of
learning the world’s most romantic language when half of Italy seems intent on
replacing it with an ugly mishmash of Italian and English.

For example, looking for somewhere to stay on that vacation in Tuscany? If gli
hotel are
fully booked, lo staff should be able to point you to a bed and breakfast. If you plan on
staying for more than a week, you might consider un residence or un loft with un big
open-space.
Make sure you’re close to a town centre — handy if you need to fare lo
shopping
at un shopping centre, sure to be full of i fashion outlet and i discount shop.

It’s just as bad in the media. There’s Il
Premier
Silvio Berlusconi using la sua private jet to ferry i VIP and le showgirl to i party at his villa, where
he’s said to have bedded una sexy escort.

It’s not the first time he’s committed una gaffe. No wonder he appears
to be wilting under lo stress and complaining about la sua privacy. Some anti-Berlusconi
activists have gathered outside parliament to hurl gli slogan. But he’s more worried
about the reaction from il settore dei business. That and un nuovo
poll
suggesting most Italians think his budget will prove un flop.

Elsewhere in le news? Un killer on the run, leaving
residents of one Calabria village in lo shock. Thankfully detectives have now
caught him, putting uno stop to his crimes.

Far worse are the gossip and beauty magazines, where you learn Madonna non è
più single. She’s got un nuovo boyfriend, and she and il suo
partner
have been seen together in un resort. A few pages on, una showgirl from un reality
show is
supping i cocktail in un bar. She ended up going for a spot of il clubbing before heading home
with una pop star from una boyband.

Enough already. What’s so difficult about using spuntino instead of snack
and  albergo instead of hotel?

No surprise that last year the prestigious Dante
Alighieri Society began a campaign to preserve the purity of the Italian
language. They have a tough job on their hands, though. Anglo-Italiano, it seems, is il
nuovo trend.

Words  (That Only Seem to Be English)

Ainsley Okoro works for the property in Italy website Homes and Villas Abroad.com and specializes in Calabria property and Tuscany property