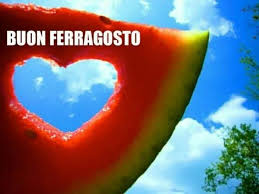 I celebrated my first  Italian Ferragosto in Capri, which turns out to be a most fitting (though crowded) place to be on August 15. This summer celebration—as festive as America’s Memorial Day, 4th of July and Labor Day rolled into one—dates back thousands of years.

The Roman emperor Augustus so enjoyed late summer that he claimed the month we now call by his name.  He ordered month-long festivities, called the feriae augustus, which included games, races, and rituals to honor the goddess Diana, who was worshiped as queen of the fields as well as of heaven and earth. Augustus was equally enamored with the beguiling island of Capri, which he appropriated from the municipality of Naples in exchange for the nearby island of Ischia.

With the rise of Christianity, August 15 became a religious holiday commemorating the Assumption, or lifting into heaven, of Mary, the mother of Jesus. Over the centuries various communities developed special ways of honoring the Madonna. In the town of Sassari men carrying elaborately decorated wood columns dance through the streets. Messina’s townspeople construct La Vara, a fantastic sixty-foot-high pyramid from which stars, clouds and figures of saints dangle. At one time young boys dressed as angels and apostles were hoisted into the air by rings attached to La Vara. As part of the ceremonies a young girl representing the Virgin Mary freed a criminal.

According to a Neapolitan legend, local fishermen once pulled a portrait of the Madonna from the sea, and their king ordered a church built around it at the beach. On August 15, which became known as the Festa della Nzegna, everyone was tossed into the water. The night before the faithful ate only watermelon but feasted on sumptuous desserts the next day. In the late Renaissance Rome’s governors flooded the splendid Piazza Navona for festivities that included fake fish splashing in the water and young boys diving for coins. As darkness fell, candles and torches glistened, and Romans enjoyed lavish dinners called sabatine (little Saturday feasts).

Times have changed. Now a national holiday, Ferragosto marks the height of the Italian vacation season. Many restaurants and shops in major close, and  residents flock to the beaches. Villages on the coast typically end the long evening with spectacular displays of fireworks (fuoci artificiale).

But amid all the gaiety some Italians, usually because of their jobs or finances, must remain in the deserted cities. And so the phrase “Ferragosta in citta” has come to mean a bleak, unhappy situation.

Wherever you are, I hope you enjoy the fullness of summer this August!

Dianne Hales is the author of LA PASSIONE: How Italy Seduced the World, LA BELLA LINGUA: My Love Affair with Italian, the World’s Most Enchanting Language and MONA LISA: A Life Discovered. For more information,  visit diannehales.com.