Italy’s “Day of the Dead” 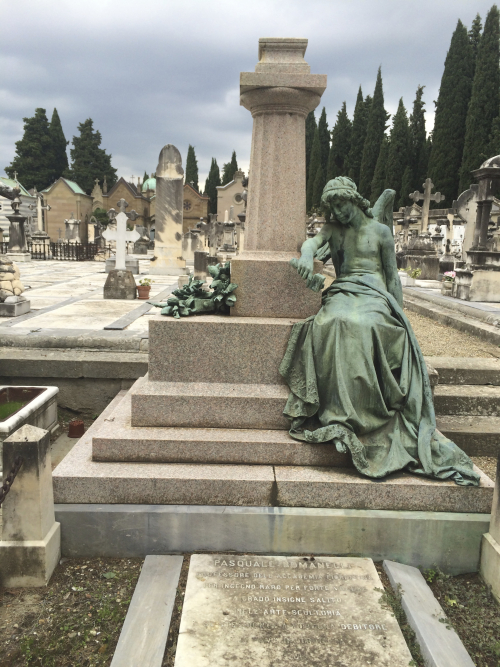 Italy’s cimiteri (cemeteries) are coming alive this week as families prepare for November 2 (All Souls’ Day), which the Catholic Church dedicates alla commemorazione dei defunti (to the commemoration of the deceased). To celebrate Il giorno dei morti (the Day of the Dead), many Italians travel to their home towns to place fiori, soprattutto crisantemi, e lumini (flowers, especially crysanthemums, and small lights) on the graves of departed relatives.

A friend explains that this is “non un giorno di lutto, bensì una giornata felice” (not a day of mourning, but instead a happy day) when families share frutta, dolci, cioccolato e caramelle (fruit, sweets, chocolates and caramels) as a way of remembering the deceased and, she contends, of communicating with them without words. Among the sweets baked to ease sadness are ossa di morto (literally the bones of the dead) and stinchetti dei morti (little shins of the dead).

Italian cemeteries often resemble marble-walled cities of souls. Some, called cimiteri monumentali  (monumental cemeteries), are famous for their funerary art.  But what impressed me most on a visit to the centuries-old graveyard at San Miniato in Florence were the touching tributes to lives that ended too soon.

“Non ti dimenticheremo” (We will not forget you), reads a memorial from 1943, “perché fosti il migliore di noi, perché c’insegnasti ad essere buoni e coraggiosi” (because you were the best of us, because you taught us to be good and courageous).

Amid many monuments praising gallant young men who fought in Italy’s wars, I came upon one for a remarkable woman, Antonia Masanello (1833-1862). This courageous “Garibaldina” dressed as a man to battle by her husband’s side in the fight for Italian independence led by Giuseppe Garibaldi. The words on her tomb read:

“Se non fosse che era donna le spalline avria avute e non la gonna e poserebbe sul funereo letto con la medaglia del valor sul petto.” (If she hadn’t been born a woman, she would be wearing epaulets instead of a skirt, and she would have been laid on her funeral bed with the medal of military valor on her chest.)

“Ma che fa la medaglia e tutto il resto? Pugno’ con Garibaldi. E basta questo.”  (But are a medal and all the rest really important, after all? She fought alongside Garibaldi. This is enough.)

An enchanting memorial captures the vitality of a handsome young aviator, Mario Mazzone, who died in 1944 during the Second World War, possibly while an Allied prisoner of war. I had assumed that Maria, his marble companion, was his wife or fiancee. However, after I first recounted this story, readers informed me that Graziella Cirri, who had researched the history of the tomb, found that it was commissioned by Mario’s mother in 1947 and speculated that the two were brother and sister.

Whatever their relationship,  Mario, in his military dress uniform,  and Maria, with long hair and an elegant gown, radiate  joy as they dance on their grave, reminding us that love never dies.