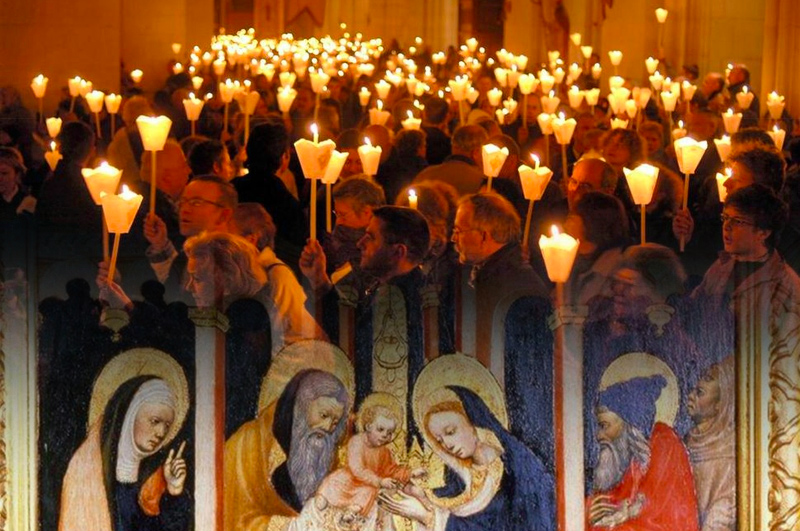 Not many people have a classic comedy dedicated to their birthday. I do—although that’s far from the second of February’s only claim to fame. This date may always signify Groundhog Day to fans of Bill Murray and the shadow-fearing furry creature who put the little town of Punxsitawney, Pennsylvania, on the map. In Italy, it marks the feast of La Candelora (Candlemas).

The Catholic Church honors the Purification of the Virgin Mary, a traditional ritual for new mothers, by blessing the candles to be used in churches during Mass and other religious celebrations. Long before groundhogs got involved, Italians viewed il giorno della Candelora as a good day to predict the weather. As one old saying goes, Per la santa Candelora, o che nevichi o che plora, dell’inverno siamo fuora. Roughly translated, this means that by February 2, even if it’s snowing or raining, winter is over. Another saying is less optimistic: S’egli è sole o solicello, siamo ancora a mezzo il verno. (If it’s sunny or semi-sunny, we are still in the middle of winter.)

Of course, food also is never out of mind, especially as Italians anticipate the long meat-less months of Lent.  Per la Candelora, chi non ha carne impegni la figliola. (For Candlemas, whoever hasn’t got meat—essential for Carnevale—should pawn his daughter.)

February 3 marks la festa di San Biagio (Saint Blaise), a doctor and bishop martyred in the fourth century and acclaimed for his miraculous healing ability, piety and compassion. He is most famous for the rescue of a boy who was choking after having swallowed a fishbone.

On this day Catholics place their necks between a “V” formed by two crossed candles and receive a special blessing to ward off threats to their throats. In Milan, families eat the last of their Christmas panettone as a propitiatory gesture against coughs and colds. Others celebrate with special dumplings, meatballs, breads and sweets such as the “tarallucci of San Biagio,” shaped like small donuts mixed with anise seeds, and “cudduri San Brasi,” cakes with hazelnuts and almonds blended with honey.

February, which brings la festa degli innamorati (the feast of lovers) on February 14 and the nonstop revelry of Carnevale, has inspired many Italian sayings, including these:

*Se la viola esce a febbraio, serba il pagliaio.  If the violet comes out in February, conserve your haystack.

*Per Sant’Agata la merenda è ritrovata.  The fifth of February marks the beginning of work in the fields, so once again farm workers will be needing an afternoon snack.

Wishing you all a very festive February!