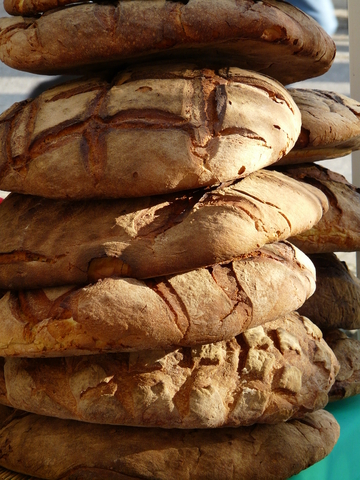 As we celebrate this Anno Dantesco (Year of Dante), I’m reminded of a special pleasure that the poet shared with his countrymen: a passion for the local bread.  In his epic Divine Comedy, Dante Alighieri, banished  from Florence for political reasons, bemoaned as one of the anguishes of exile “the saltiness of other people’s bread.”  His beloved hometown’s unsalted bread or pane (pronounced pah-nay) soaks up the flavors of sauces, stews and soups.  In a similar way, the Florentine dialect, the basis of modern Italian, soaked up the richness of Dante’s lush language.

In many a panetteria (bread shop) or paninoteca (sandwich bar) in Florence, I’ve mulled the varieties of available breads, including:
*filone (long sticks of the classic Tuscan unsalted bread)
*rondeggiante (round, flat loaves)
*bozza or pagnotta (tall, round loaves)
*pan di ramerino (rosemary bread, decorated with a cross and once sold by traveling bread salesmen outside churches during Holy Week)
*panina gialla aretina  (a rich yellow bread, often enhanced with raisins, saffron and spices, eaten at Easter with eggs blessed in church the day before)

But pane in all its forms doesn’t show up only in shops or at tables in Italy. Bread makes its way into everyday conversations. An upstanding person is buona come il pane (good like bread, the equivalent of  “good as gold”).  A plain-spoken one says pane al pane e vino al vino (calls bread bread and wine wine–in the English idiom, calls a spade a spade).  Italians portano a casa la pagnotta (carry home the bread) rather than bring home the bacon or do whatever they must to earn their pane quotidian (bread and butter).  In lean times, they mangiano pane e cipolla (live on bread and drippings) and reflect that “quando si ha fame il pane sa di carne” (when you’re hungry, bread tastes like meat).

A person who meets his match trova pane per i propri denti (finds bread for his teeth).  Someone who has an opportunity but lacks the ability to make the most of it (or vice versa)  ha il pane ma  non ha i denti (has the bread but not the teeth). People who make all sorts of sacrifices for the sake of others si tolgono il pane di bocca (take the bread out of their own mouths) to help. Others have to scrounge per un tozzo di pane (for a morsel of bread–next to nothing).

At lunch in Florence, a friend weighing two options said the dilemma was like my  dish of pappa al pomodoro, the classic local tomato soup made with stale bread: Se non è zuppa è pan bagnato (literally, if it’s not soup, it’s wet bread —  or “six of the one and half dozen of the other”). When we overheard a nearby couple’s heated debate, she observed that both had managed to render pan per focaccia (exchange tit for tat).

English and Italian speakers agree on one simple truth: “Non si vive di solo pane.“  (Man does not live on bread alone.) If we had to manage on such a diet, I’d opt for a lifetime of Italian bread — in its all its crunchy varieties.