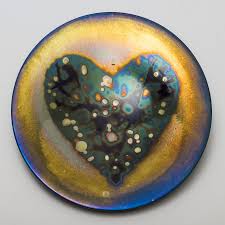 In the thirteenth century an Arabian technique for glazing rough clay with gleaming white enamel made its way, via the Spanish island of Majorca, to Italy. The Umbrian town of Deruta embellished maiolica (majolica) with colorful designs baked into the glaze during a second firing.

In the Renaissance, a Tuscan potter named Mastro Giorgio Andreoli became intrigued with another Arabian form of alchemy that turned clay plates into gold—or at least made them shimmer like the precious metal. The key was a “third firing” of an already twice-baked ceramic in a specially constructed oven called a muffola. Noble families clamored for this lustro (luster), but in the tumultuous centuries that followed the Renaissance, the secrets of its shimmer died with its masters. The Italian passion for beauty in all its radiant glory did not.

After 1861, the unification of Italy inspired a zealous patriotism in artists and artisans, who  looked to the Renaissance for inspiration.  Paolo Rubboli (1838–1890), descended from generations of ceramicists, found a treasure in his family’s workshop—a book, written in 1583, that described the technique for producing lustro ceramics. He was convinced that he could re-create this dazzling finish—if he could build a specialized muffola oven. But this would require the support of an entire village. He found it in postcard-pretty Gualdo Tadino in Umbria, which welcomed Paolo and his wife, Daria, also an accomplished ceramicist.

In the 1880s, they constructed a specialized muffola oven and, through endless hours of trial and error, mastered the painstaking lustro technique. Dozens of potters moved to the village to add a “blaze of glory” to their works. When Paolo died unexpectedly, Daria  continued her husband’s tradition for thirty years. “Think of her passion!” says their son Maurizio Tittarelli Rubboli, a prize-winning ceramicist. “She was a woman with three young children, on her own and running a business in a remote mountain village.”

As Gualdo Tadino ceramics gained international recognition, the village prospered—until the devastation of World War II and the collapse of Italy’s economy. In 1955, the family was forced to close the business. Their studio fell into ruin. Yet their passion lived on.  After working tirelessly to raise the needed funds, Maurizio opened the doors of the restored Museo Opificio Rubboli in 2015. 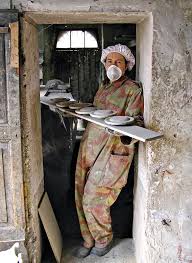 During a visit, Maurizio led me into the soot-blackened chamber that houses the muffola, the last remaining oven of its type in the world, and described how he re-creates the centuries-old technique:

Wearing flame-resistant overalls, he places a twice-baked piece of pottery inside the circular oven and creates a smoky fire.  With no precise gauge, Maurizio relies on experience and  peeks through various “spy holes” to determine when the firing is complete. Then he clears the embers, leaves the ceramic in the oven overnight—and waits. The next morning, Maurizio removes a dark, ash-covered blob and starts polishing, rubbing until the ceramic glows as if sprinkled with stardust.