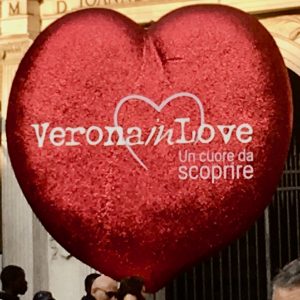 “What could be more romantic than Valentine’s Day in Verona?” I asked my dubious husband as I persuaded him to visit the hometown of Shakespeare’s Romeo and Juliet for La Festa degli Innamorati (the Feast of the Lovers).

The original Valentino served as a Catholic priest in third-century Rome. The emperor, believing that bachelors made better fighters, had outlawed marriage for soldiers. Sympathetic to young couples eager to wed, the compassionate cleric defied the decree and continued to perform weddings.

Thrown into prison, Valentino developed a friendship with a young girl—perhaps his jailer’s daughter—who came to visit him. Some say they fell in love; others claim that he cured her blindness. Before his execution, he sent her a note signed, “Tuo Valentino” (Your Valentine).

Lovers around the world have been using the phrase ever since. Towns throughout Italy celebrate the saint’s day, but the festivities have never morphed into an Americanized card-sending, rose-buying, candy-giving frenzy.

On the crisp sunshiny day of our visit, Verona, bedecked in red banners and heart-shaped balloons, bustled with smiling couples.  When I asked friends if Italy’s most famous lovers, Juliet and her Romeo, had actually lived there, they responded, “Chissa?” (Who knows?).

The oldest known written version of their tale dates back to 1476, when Masuccio Salernitano (named for his home town of Salerno) recounted the story of two star-crossed lovers named Mario and Gianozza of Siena. The author swore,  “heaven to witness,” that the tragedy was a faithful narrative of events that occurred during his time.

A more sophisticated  writer, Luigi da Porto, renamed the lovers Giulietta and  Romeus (later Romeo) in his  Newly Refound History of Two Noble Lovers, published about 1530. Da Porto relocated the tale to Verona and created the characters of the garrulous nurse, Mercutio, Tybalt, and Friar Laurence. He insisted that he had heard the story as a soldier in Friuli.

The British writer Arthur Brooke translated the Italian tales into English verse in 1562; William Painter retold the story in prose in 1582.  Shakespeare plucked his plot from these translations when he wrote his play in the 1590s.

The Veronese have adopted his teenaged lovers as their own. Juliet’s storied balcony, small and low, hunches above a courtyard grimy with spray-painted hearts and lovers’ initials. Couples squeeze up narrow stairs, pause for a selfie on the balcony, and elbow back down. A few blocks away stands the forlorn entry to Romeo’s house, marked only by a small rusty plaque.

On a bridge crossing Verona’s moat, we passed an iron gate so laden with “love locks” that a concrete support had  collapsed, spilling dozens of these tokens of undying commitment across the pavement. The sight reminded me of Umberto Eco’s definition of romantic love as a state of “devastatingly unhappy happiness,” part affection and part affliction–yet, as the pilgrims to Verona remind us, always worth pursuing.

On this Valentine’s Day — or all year round — here are some sweet Italian phrases to offer your beloved: