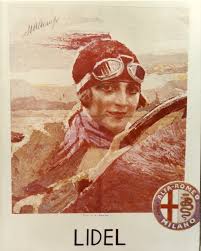 Italy’s first female race driver lived up to the title of a biography of her extraordinary life by Luca Malin: Indomita (Indomitable).

At thirteen, Maria Antonietta Avanzo (1889–1977), the granddaughter of one of Napoleon’s generals who had settled in the Veneto, stole her father’s motorized tricycle for a joy ride, careened through the village streets, and ran into a pedestrian. At nineteen, she married a baron. At twenty, compelled by a passion to go as fast as possible, she entered her first car race—and won her class, despite having to stop to replace a tire.

The mother of two wore her hair in a boyish Parisian bob, favored “short” skirts that skimmed her ankles, and left her husband after a private investigator confirmed that he was cheating on her. She hunted tigers in India, bought a five-hundred-acre sheep farm in Australia, and developed friendships with Gabriel D’Annunzio, Amedeo Modigliani, and Ernest Hemingway.

But her greatest passion remained la velocità (speed). The Flying Baroness became the first woman to compete in some of Europe’s most daunting races, to try out for the Indianapolis 500, and to join the most exclusive of racing teams, the Scuderia Ferrari. She first attracted Enzo Ferarri’s attention—and respect—in a speed trial on a beach in Denmark, where her car, an enormous, torpedo-shaped, twelve-cylinder Packard, caught fire at full speed. Thinking fast, she drove the flaming auto into the sea and walked blithely through the waves to shore.

The “baroness of the roaring road” told an American reporter that, after being “crossed by love,” she took up racing as “a safer alternative to drugs or drink.” As she explained, “an automobile motor is more reliable than a man.” Lauded in Italy for her elegantissimo style, she said she feared breaking her nose more than losing her life. Asked how she calmed her nerves before a big race, she replied, “I take a swallow of cognac and tell myself to be brave.”

The baroness never lost her zest for adventure. At fifty, she placed sixth in the grueling Tobruk to Tripoli distance race. During World War II, she drove trucks for the Red Cross and helped trundle Jews out of Italy. After the war, the mother of Renzo Avanzo, an actor, writer, and film director, and aunt of Roberto Rossellini (whom she taught to drive) founded a movie production house specializing in documentaries. At age sixty-seven, she transported refugees during the Budapest revolt. Pulled over for speeding in a quiet Rome neighborhood in her seventies, she protested, “If my car travels at 180 (kilometers per hour), I go at 180!”

Looking back on decades of full-throttle living, the baroness reflected, “I have had everything from life: beauty, money, loves, and two magnificent children—and I have always done what I wanted to do.” She died of cancer at age eighty-seven.