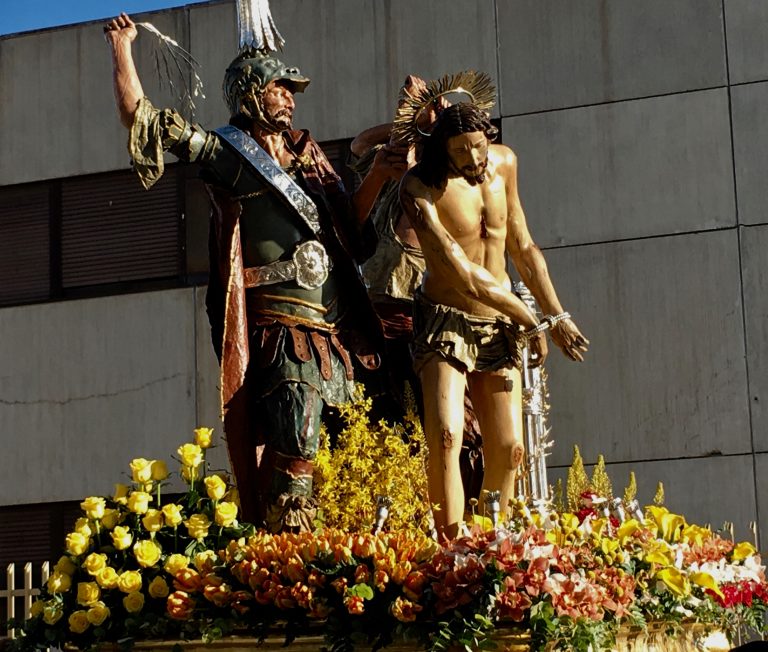 La Settimana Santa (Holy Week) will be different this year, especially in Italy.  In years past pilgrims from around the world would travel to Italy to commemorate the passion, death and resurrection of Jesus Christ. Every region celebrated with rituals that blend faith, folklore, tradition and community:

In the massive piazza of St. Peter’s Basilica at the Vatican, tens of thousands gathered to re-enact Christ’s triumphant entrance into Jerusalem. During my Palm Sunday visits, chants of “Osanna!” echoed through the vast square as the Pope blessed the palms and sent a special message to the youth of the world. On this special day Catholic worshipers in Italy carry crosses made from palm fronds and olive branches.

In Castelsardo in Sardinia, famous for its elaborate Holy Week celebrations, an evocative ritual called Lunissanti would begin at dawn and continue into the night. The Confraternita di Santa Croce (brotherhood of the Holy Cross), wearing long white hooded tunics and carrying religious symbols, marched in procession  and sang medieval songs in a unique style called faburden or fauxbourdon (French for false bass).

In churches throughout Italy the faithful would gather in the late afternoon or early evening for the Mass of the Last Supper (la Messa del’Ultima Cena), when Christ created the sacrament of the Holy Eucharist. In a gesture of humility and Christian brotherhood,  priests (including the Pope himself) recreated Christ’s bathing of the feet of the Apostles by washing the feet of twelve parishioners.

Some villages in Italy would stage dramatic processions of the Stations of the Cross  (le Stazioni della Via Crucis).  In Trapani, a Sicilian town, the solemn procession recreating Christ’s suffering and death lasted for 24 hours. The oldest Good Friday procession in Italy, held in Chieti in the Abruzzi, featured 100 violinists playing Selecchi’s Miserere. In Sorrento there were two Good Friday processions:  the white procession (processione bianca) in the morning, with participants wearing white, symbolic of Mary’s hope as she searches for her son, and the black procession (processione nera) in the evening, where black represents Mary’s sorrow as she beholds his dead body. In Rome the Pope traditionally led a procession through the Stages of the Cross in and around the torch-lit Colosseum. As thousands of worshipers clutched candles in the dark, professional actors would read dramatic interpretations of Christ’s suffering — one of the most moving religious experiences I’ve ever had.

Mass is not celebrated during this day of silence and prayer in honor of the dead Christ, and the tabernacle, which usually contains Communion hosts, is left empty and open. After sundown the solemn Easter vigil (Veglia pasquale) begins with the liturgy of fire (la liturgia del fuoco) and the lighting of the Easter candle (il cero pasquale), which represents the “Light of Christ.” During the liturgy of the baptism (la liturgia battesimale), Catholics renew their baptismal vows.

This year, as in 2020, Italians are experiencing their own Via Crucis (Stations of the Cross, an expression used for a difficult time or challenge). Once again we join with them in looking forward to the promise of rebirth that Pasqua (Easter) brings.

← Welcoming Spring in Italian An Italian Easter →
FOLLOW BY RSS