For Love of the Italian Language: Seize the Day! 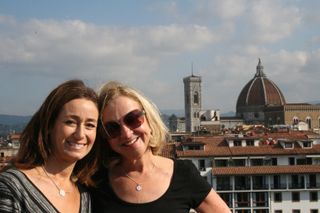 Many readers have expressed their appreciation and affection for LA BELLA LINGUA, but I've never had a fan who crossed a continent and an ocean to join me in Florence. Here's her story:

There’s an author whom I have adored since 2010, when I discovered her best-selling book, La Bella Lingua, at an open-air bookshop in Florence. Subtitled “My Love Affair with Italian, The World’s Most Enchanting Language,” La Bella Lingua (LBL) is Dianne Hales’ story of her decades-long journey of learning Italian and loving all things Italy. I think of it as the bible for people like me who have been bitten by the “I love learning Italian” bug. It’s also a fantastic read for anyone who has a soft spot in their heart for Italy.

In the last four years, I have read LBL three times, finding more bits of wisdom or parts which make me laugh out loud with each new read. After returning from Italy in 2010, I, along with nearly 2,700 others,  joined the LBL Facebook group and delighted in the fact that Dianne herself was actively responding to comments. I followed her award-winning blog, "Becoming Italian Word by Word," and anxiously awaited her next book, MONA LISA: A Life Discovered, released in August. It’s safe to say that I became a tifosa — the Italian word for a soccer-crazed fan.

MONA LISA, which I devoured in three days, is a treasure of a book that reads like historical fiction but uses fact to take us through the life of the woman believed to be the model behind the world’s most famous painting, Lisa Gherardini. Through her painstaking research and seamless writing, Dianne takes us through a magic portal and plants readers into Florence in the 1400s, allowing us to see life from Gherardini’s eyes.

With the launch of MONA LISA, Dianne embarked on a book tour, with appearances in some cities just an hour’s plane ride away.  Then I found out that one of Dianne’s stops was Florence, where she would not only be presenting her book, but also hosting walking tours to share Florence from Mona Lisa’s perspective.

With three kids in school, I did not plan to go to Italy,  but I started daydreaming: What if I could spend a week in Florence? What if I could walk Mona Lisa’s Florence, perhaps with Dianne herself? I presented the pretend trip to Husband (he is used to this). He encouraged me to make the necessary inquiries for more details. (Ok, there was a bottle of wine involved during this discussion.)

The next day, I composed an e-mail about the walking tour and book presentation. Just a few hours later, an enthusiastic response came from Dianne herself. She was touched to hear from me!  I was overjoyed. Husband thought I should not miss this opportunity, so just 48 hours later, I had plane tickets.

Within a few weeks, I flew off to the adventure of a lifetime. The Trip was, in short, perfection. I loved every single second, from the moment I spotted the Duomo from the plane to my final arrivederci and prayer at Brunelleschi’s dome.

From unintentionally climbing the dome on my first morning, to walking Mona Lisa’s Florence, to meeting adored author Dianne Hales in the very city where I first discovered her work, to checking off sites on my Firenze Card, the week was an unbelievable gift.

There are two morals to this story. The first from Dianne, who graciously welcomed an enthusiastic stranger to join her in Florence  and then shared herself and her time so willingly. What an act of kindness and generosity on her part and what an honor for me! I will forever cherish the memories.

The second comes from Husband, who lives his life carpe diem and inspires our family to do the same. Everything about this trip was impractical, inconvenient (and, daresay, irresponsible?) on my part. What kind of mother and wife abandons her responsibilities to skip around Florence for a week without a care in the world?

I suppose the kind who is married to a husband who knows that when a door opens with an opportunity to do something phenomenal, it’s best to step through. Chissà (who knows)  what next week, next month  or even tomorrow will bring? So if you can, as often as you can, seize the day! 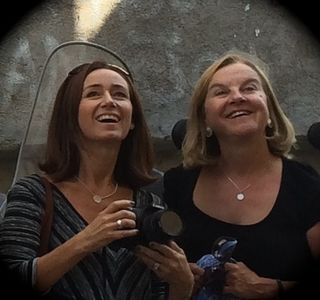 Stacy, I'm so glad you seized the day! It was a joy to share such unforgettable experiences with you in Florence. DH

Stacy di Anna is a mother of three who lives in California and writes about her family ("prayers") and Italian experiences ("piazzas") at "Prayers and Piazzas."  DIanne Hales is the author of MONA LISA: A Life Discovered and LA BELLA LINGUA: My Love Affair with Italian, the World's Most Enchanting Language.

← Italian Phrases You Won't Learn in Class: Animals in Conversational Italian Excavating the Italian Language in Rome →
FOLLOW BY RSS