La Befana in the Italian Language 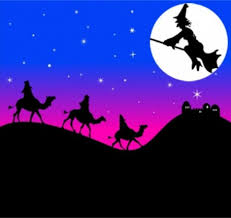 Days after many Americans have taken down their Christmas trees and packed away the decorations, Italians continue to celebrate.  Their final feast is  L’Epifania, on January 6,  which commemorates the arrival of i re magi, the three kings who followed the bright Christmas star (stella cometa) to bring gifts for bambino Gesù (baby Jesus).

Italian children traditionally received their presents on Epiphany  rather than Christmas.  However, as Babbo Natale (Father Christmas) has become more popular in Italy, youngsters often get gifts on both holidays— if they’ve been good.

In Italy the job of delivering nice gifts to good children and cenere e carbone (ashes and coal) to naughty ones belonged to La Befana. Her name comes from befania, a corruption of the Greek word epifania, which means apparition or manifestation.

According to one legend, the Magi stopped by Befana’s house and invited her to accompany them on their trip to Bethlehem. She refused because she had too much housework. Regretting her decision, Befana gathered presents in a bag, hopped on her broomstick and took to the skies.  Unable to pick up the Magi’s trail, she stopped at every house along the way to leave presents, just in case the Christ Child was there.

Different towns and regions of Italy traditionally celebrated L’Epifania in various ways. Some had a living crèche, with the village’s newest baby in the role of Jesus. In others  three children, dressed as the Magi with a golden star atop a pole, sang pasquelle (little songs) about the three kings as they paraded through the streets.

In Friuli in northern Italy, families gathered around a big Christmas log that had been burning for twelve days in a special raised hearth called a fogolar.  Others lit giant bon fires in their fields. The Friulians believed these Epiphany fires—called pan e vin (bread and wine) in some places and vecja (old one in dialect) in others–lit the way for the three wise men en route to Bethlehem.

Throughout Italy January 6 marks the end of the long holiday season. “'E l’Epifania,” an old saying goes, “Tutte le feste porta via,”  (It’s Epiphany, and all of the holidays go away). But another festival—the pre-Lenten Carnevale—isn’t far away. “Dopo le santé feste de Natal, le santissime de carnaval!” another proverb says. (After the holy feasts of Christma, the most holy ones of carnival!)

Italian children memorize verses about La Befana and recite them for their families. Here is an example:

La Befana comes in the night / With shoes completely broken / With her skirt all in patches / Hurray, Hurray, La Befana!

Dianne Hales is the author ofLA BELLA LINGUA: My Love Affair with Italian, the World's Most Enchanting Language, MONA LISA: A Life Discovered and the upcoming LA PASSIONE: How Italy Seduced the World. Click here to preorder. For more information, visit her new website: www.diannehales.com

Click below to read the entire story of La Befana: