Celebrating the 150th Anniversary of Italy and Its Language 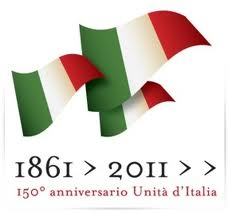 The 150th Anniversary of Italy

In 1860, the charismatic general Giuseppe Garibaldi led a band of 1,000 red-shirted irregulars into the mezzogiorno, the hot land of the midday sun. As the troops of  Il Risorgimento, the nationalistic movement, marched in triumph across Sicily, Garibaldi, wearing his trademark poncho and sombrero, spotted a robust youth dozing under a carob tree. Reining in his horse, he asked, “Young man, will you not join us in our fight to free our brothers in Southern Italy from the bloody tyranny of the Bourbon kings? How can you sleep when your country needs you? Awake and to arms!”

The young man opened his eyes and silently flicked the fingers of one hand under his raised chin. The timeless gesture translates into “I don’t give a **** (insert the expletive of your choice).” Garibaldi accepted his wordless dismissal and rode on.

Such indifference was not uncommon throughout the patchwork of city-states, duchies, and remnants of foreign empires. Yet against all odds, the people of the peninsula came together to form a united nation in 1861. On March 17 Italy celebrates its 150th anniversary — an achievement many still view as something of a miracle.

“We have created Italy,” one of its founding fathers sighed. “Now we must create Italians.”  At the time four in five of its citizens were illiterate. Fewer than 10 percent spoke Italian exclusively or with greater ease than local a dialect. Crowds cheering “La Talia,” as they pronounced the unfamiliar word l’Italia, thought it was the name of their new queen.

What brought Italians together?  I believe it was their dedication to what Italy’s president has called  “la nostra prima patria” (our first fatherland): Italian. “When a people has lost homeland and liberty, their language takes the place of a nation and of everything,” observed Luigi Settembrini, a nineteenth-century Neapolitan “professor of eloquence.”

Italian – la bella lingua — was painstakingly crafted in the late Renaissance by a group of high-spirited Florentine intellectuals who set out to separate the literary equivalent of flour (good language) from bran (bad language). The fun- and food-loving members of L’Accademia della Crusca  (Academy of the Bran) playfully gave themselves nicknames related to cooking and baking, such as Lievito  (yeast or leaven) and Grattugiato (grated). These witty wordsmiths devoted decades to a serious mission: compiling the first great dictionary of officially recognized words in any European tongue.

Within the 960 oversized pages of the Vocabolario degli Accademici della Crusca, published in 1612, lies Italian’s genome, constructed of words chosen to please the ear, the eye, and the soul.  No less than artists in a Renaissance bottega  (workshop), the linguistic  “bakers” of La Crusca  created a living masterpiece. Because of their efforts, the lyrical language of Dante, the poet Petrarch, and the master storyteller Boccaccio – le tre corone (the three crowns) of Italian literature — still echoes in Italy’s classrooms, shops, and streets.

La Crusca is marking the nation’s anniversario with a stravizzo delle parole (an extravagant banquet of words) on March 16,  la notte tricolore (the night of the tricolor, the Italian flag), in the Piazza San Croce in Florence.   All of us who cherish Italy and its language join in the celebration.

Click below to hear Verdi’s “Va Pensiero,” the  poignant lament of  enslaved Hebrew captives longing for their homeland, which became an unofficial anthem for the unification movement.