“L” Is for Luna in the Italian Language

"J," known as il lungo, is seldom used in modern Italian, except for a name like Jacobo. K, or kappa, occurs only in foreign abbreviations such as kg (for kilogramme) and km (for kilometre). And so my alphabetical series continues with the lovely "L." 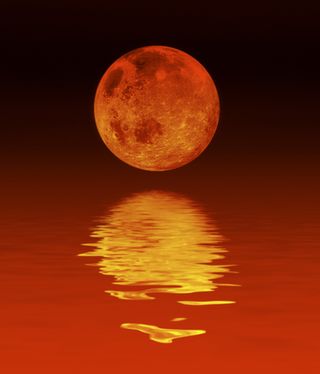 Una luna italiana is no ordinary heavenly body. One of the most magical sights I’ve seen in Italy is the rising of una luna rossa (a red moon) from the sea.

One summer night on the island of Capri some mariner-friends told us to meet them at a popular restaurant at precisely 9:35 p.m. When we arrived at the bustling eatery, they escorted us away from the crowded main dining room to a quiet alcove and insisted that Bob and I take the two chairs looking toward the sea. As if on command, una luna rossa rose majestically from the sea to shine upon the faraglioni, the mammoth rock formations that heave out of the water like relics of a primeval ruin.

La luna, which can be nuova (new), crescente (waxing), piena (full), or calante (waning), doesn’t just appear in Italy's night sky. Someone with extravagant wishes may be said to chiedere la luna (ask for the moon). Italians refer to a fetus as being ancora nel mondo della luna (still in the world of the moon, or not yet born).

Some folks are so absentminded or detached from reality that they seem to vivere nel mondo della luna (live in the world of the moon) while others are in such bad moods that they avere la luna storta (have the crooked moon). In hard times people find themselves struggling to sbarcare il lunario (make ends meet).

An Italian lunatico may be temperamental but isn’t necessarily as wacky as an English lunatic. But do watch out for anyone who tries to fare vedere la luna nel pozzo (makes you see the moon in a well). He’s just stringing you along. And you certainly don’t want to end up doing as the local dogs do: abbaiare alla luna (barking at the moon—or exerting yourself in vain).

Dianne Hales is author of LA BELLA LINGUA: My Love Affair with Italian, the World's Most Enchanting Language and MONA LISA: A Life Discovered.