The Heights of Fashion in the Italian Language 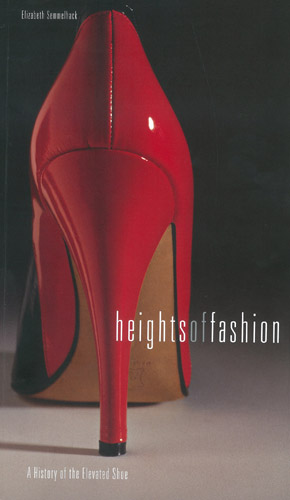 Long before I spoke Italian, I was fluent in the language of Italian shoes. Over the years I’ve heard some tall tales about their history, but my favorite is the story of an invention for which I, like other height-challenged women, remain forever grateful:  high heels (tacchi alti).

In the Renaissance the ladies of  noble households  vied to parade the longest trains, the fullest skirts, and the most extravagant silks, brocades, and velvets.  Under strict  “sumptuary” laws designed to restrict excessive displays of finery, city-states worked out formulas limiting how much fabric a dress could contain. The taller the woman, the wider and longer her gown could be.  And so women looked for ways to enhance their height.

Some say Leonardo da Vinci, that most versatile of geniuses, created the first elevated shoes. Others credit Catherine de’ Medici, the teenage bride who demanded added stature for her wedding to the future king of France in 1533. If a little boost was good, more quickly seemed better.

With the aid of clever cobblers, women climbed onto wood or cork platforms that lifted them (and their fabulous skirts) as high as twenty inches above ground.  Called zoppieggi or sopei in Venice and calcagnini (from "calcagno," the heel of the foot) in other regions of Italy, these “overshoes” covered a daintier slipper, ostensibly to protect it from mud, dirt, and acqua alta  (high water) as women walked—or, more accurately, hobbled, often with the aid of canes or servants on either side—through the streets.

Venetian legislators, alarmed by the risk of falls, particularly to pregnant women, tried to prohibit these “walking footstools.” However,  they remained popular, especially among courtesans, for centuries. A local writer described the “tric trac” sound their wooden soles made when high-stepping women walked so fast “that it seems they have the devil between their legs.”

A fascinating exhibit, "On a Pedestal: From Renaissance Chopines to Baroque Heels," which runs until September 20 at the Bata Shoe Museum (a shoebox-shaped architectural delight) in Toronto,  includes towering heels directly descended from the Venetian zoppieggi.

The remarkable collection reminded me of the platform shoes, called  zatterone in Italian, that made a comeback in the 1970s.  I twisted an ankle falling off mine.