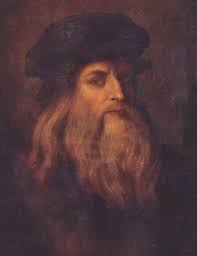 The Da Vinci Code transformed his last name into an international phenomenon, but Italians have always referred to the ultimate Renaissance man simply as Leonardo, born in April, 1542.Other artists let their works speak for them, but not Leonardo, who left a rich legacy of words. His ongoing conversations with himself covered an estimated five to seven thousand surviving manuscript pages or fragments of pages, gathered into libricini, combination sketch and notebooks, written in his idiosyncratic right-to-left “mirror script.”

“Dimmi,” (Tell me) Leonardo would scrawl when breaking in a new pen nub. His incomparable volumes tell of everything from flying machines to irrigation projects to designs for musical instruments, all set down without punctuation or accents, often with several short words run together into a long one or a long word divided in half.

An illegitimate son of a Florence notaio and a country woman, Leonardo described himself as an "omo senza lettera," a man without letters, but he loved words and wordplay.  In Florence in the 1470s Leonardo hung out with a group of Tuscan poets "alla burchia" (which translates as in a hurry, piled up at random, or higgledy-piggledy).  These rap artists of their day improvised verses in a slangy, ribald, satirical style called burchiellesco.

Leonardo’s eclectic written treatises include the memorably titled, "Why Dogs Gladly Sniff One Another's Bottom” (“Perché li cani odoran volentieri il culo l’uno all’altro”). The reason: The smell lets them know how well fed a dog is.  A whiff of meat indicates a powerful and rich owner—and a need for deference.

Leonardo delighted in puns, complex codes, spoofs, and pictograms (sketches, for instance, of the letter “o” and a drawing of a pear-–pera in Italian–to represent the word opera, Italian for "work").  He also jotted jokes in his notebooks. In one, a painter is asked how he depicted such beautiful images of things and yet produced such ugly children. The punch line:  he made his paintings by day and his children by night.  In a riddle, Leonardo asked which men walk on treetops and which on the backs of great beasts.  The answer: It depends on whether they are wearing wooden clogs or ox-leather shoes.

Saper vedere — to know how to see, Leonardo’s fundamental quest

L’ultima  cena –- The Last Supper, another of Leonardo’s masterpieces