A Year of Italian Language and Culture: Italian Opera 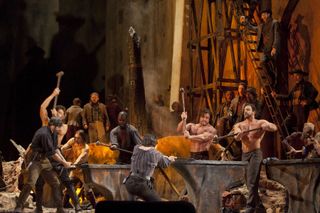 La lirica (from l’opera lirica,
or work in lyrics)  is the most
Italian of inventions, a splendid confection of music, words, drama, costumes, sets, special
effects, and complete suspension of belief that could not have emerged in any other country.  Nothing looks like Italian opera.
Nothing sounds like Italian opera. And no one speaks or has ever spoken the
elevated idiom found in the libretto
(little book) of virtually every classic Italian opera.

As soon as she steps on stage, a
donna (woman) becomes a beltà (beauty) — no matter how plain, old, or large
the singer. Rather than a chiesa (church), she goes to a tempio (temple), where
sacri bronzi (sacred bronzes) ring instead of campane (bells). Stage directions
for battle scenes invariably call for the firing, not of a cannone, but of a
bronzo ignivomo  (fire-vomiting
bronze).

Absurd though it may be, opera’s
stile gonfiato, or inflated style, can
enchant — no less than the
golden wings  of  music  that carry the poetic words aloft. I fell under its spell
long before I knew a single sentence in Italian. As a graduate student at
Columbia, I would buy a standing-room ticket  to the Metropolitan Opera and sidle into an empty seat, working my
way ever closer to the stage.  At
certain magical performances,
the  melding of words and
music bypassed my ears and shot straight to my  heart.  I could
actually feel it fluttering in my chest, directly beneath my seno.

When I moved to San Francisco to
marry a man who had never even been to an opera, I won him over slowly.  On Saturday evenings we would anchor
our little sail boat off Belvedere island, watch the stars, and listen to the
Metropolitan Opera broadcasts on a portable radio.  Without the benefit of a libretto, we had to
listen with our hearts, intuiting what the singers were saying. Within a year,
Bob was hooked, and we had student tickets (he was a psychiatry resident at the
time) to the Friday evening  series
at the San Francisco Opera.

Back then I thought that
learning Italian would help me understand opera better. Instead, the more I
learned about la lirica,  the better I understood Italian — and
Italians.  Phrases from its
overwrought libretti percolate
through the language.

Every Alfredo sooner or later is
implored, “Amami (“Love me!”), Alfredo!” from La Traviata, and every Aida becomes “celeste Aida,” another of Verdi’s heroines. Men who
shake my hand on a chilly day break into, “Che gelida manina!” (“What a cold
little hand!”)  from La Boheme.
Thanks to la lirica, vendetta (vengeance)
is always tremenda (terrible), as in Rigoletto, while  lacrime (tears) are furtive (hidden), as
in L’Elisir  d’Amore,  and spiriti (spirits) bollenti (boiling-hot), as in La Traviata.

Words and Expressions (from some
of my favorite arias)

Photo above courtesty of San
Francisco Opera by Ken Howard.