Over the moon in the Italian language 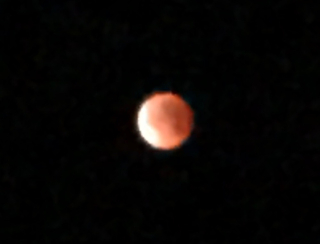 I asked the same question last week when the heavens put on a spectacular show, a trifecta of lunar glory: a super full moon (una super luna piena) passing closer to the earth than usual, a blue moon (una luna blu) and a blood  or red moon (una luna rossa) that reflected the light of the rising sun as it emerged from an eclipse (eclissi)–seen above from the California coast.

Una luna rossa  rises often over Italy. Scientists explain this as un'illusione ottica (an optical illusion) that occurs when the moon is bassa sull'orizzonte (low on the horizon). Una luna blu can occur only when the first moon becomes full at the very beginning of the month, which happens every two or three years. As in English, "eclipse" doubles as a verb as well as a noun, and eclissare means "to obscure or outshine another person." But Italians mainly use the verb reflexively with a different twist of meaning: Mi eclisso translates as  "I slip away."

La luna, which can also be nuova (new), crescente (waxing) or calante (waning), doesn't just appear in Italy's night sky. Someone with extravagant wishes may be said to chiedere la luna (ask for the moon). Italians refer to a fetus as being ancora nel mondo della luna (still in the world of the moon, or not yet born). Campers without a tent are said to dormire all'albergo della luna (sleep in the hotel of the moon).  Someone with bow legs has la luna fra le gambe (the moon between his legs).

Some folks are so absentminded or detached from reality that they seem to vivere nel mondo della luna (live in the world of the moon) while others are so cranky that they avere la luna storta (have the crooked moon). Often people find themselves struggling to sbarcare il lunario (make ends meet).

An Italian lunatico may be temperamental but isn't necessarily as wacky as an English lunatic. But do watch out for anyone who tries to fare vedere la luna nel pozzo (make you see the moon in a well). He's just stringing you along. And you certainly don't want to end up doing as dogs did during the eclipse: abbaiare alla luna (barking at the moon–or exerting yourself in vain).

Click below to listen to Sarah Brightman's tribute to la luna: