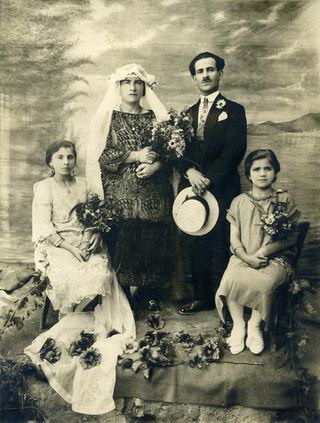 Contributing bloggista Silvia Bascelli, whose daughter recently married, volunteered to take us inside the planning for an Italian matrimonio (which translates as both marriage or wedding). Her original, more expansive Italian version will appear on my LA BELLA LINGUA website. Here is my English adaptation:

Italians use the expression “fare le nozze con i fichi secchi" (make a wedding with dry figs) for an attempt to accomplish something without spending what is necessary. It certainly takes a lot more than dry figs to organize un matrimonio italiano, including a great deal of time and quasi sempre moltissimo denaro (almost always lots and lots of money).
Since most Italians are Catholic,weddings in Italy typically take place in church.

Even those who are religious only in a superficial way often choose a matrimonio cattolico (Catholic wedding) for the sake of the atmosphere created by a church setting. Couples may search for months for una chiesetta di particolare bellezza (a little church of special beauty). Fortunately, Italy is full of these.

I matrimoni civili (civil marriages), which take place in town halls and are celebrated by a mayor or one of his deputies, are becoming more frequent. Recently quasi tutti i comuni (almost all the communes or local governments), in order to make a civil ceremony as beautiful as one in a church, have started to provide a setting di particolare bellezza (of special beauty), such as a villa or a palazzo that is the property of the commune.

Couples also must choose a restaurant for il pranzo o la cena di nozze (the wedding lunch or dinner) or il ricevimento (the reception). But before doing so, they must deal with an argomento spinoso e fondamentale (a thorny but essential issue): la lista degli invitati (the invitation list).

Since most of the expenses in a traditional wedding depend on the number of guests, there may be a struggle between the desire not to squander a fortune simply for a party and the desire to share the joyous event with tutti i parenti e gli amici (all the relatives and friends). In most of Italy gli invitati (the invitees) number at least cento (one hundred); this may rise to duecento e piu' (two hundred or more). Some consider a big, lavish party a sign of social prestige and status.

Often couples try to set off with a simple plan and then, as always happens, end up spending a great deal of money. “Non si bada a spese!” (Don’t worry about expenses!”) they may hear—or tell each other. To make matters worse, various merchants, at the sound of the word "matrimonio," feel authorized to jack up the prices of everything they supply. A dress that could cost, for example, 500 euro, ends up costing 2000 euro just because it’s white and worn as an abito da sposa (wedding dress).

E cosi' tutto il resto.(And so it goes with all the rest.)

chiedere in matrimonio – ask in marriage

Here are some scenes of Sophia Loren and Marcello Mastroianni in the glorious Matrimonio all'Italiana.