Remembering A House in Umbria 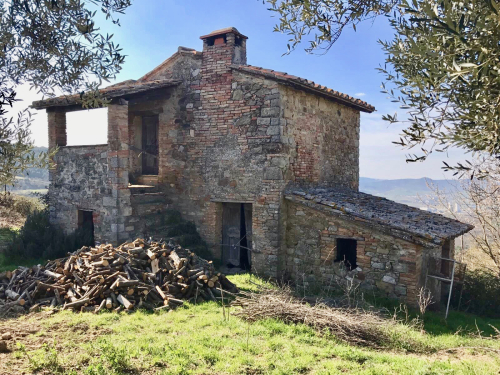 Memories of Times Past

When I look at this photo of a country home (una casa colonica) in  Umbria, my memories go back to my grandparents’ house, which looked the same, although it extended more toward the right side.  My mother lived there with her seven siblings until she married.

Theirs was a large family of cousins living together and taking care of the animals and land around the property. They were almost completely self-sufficient for all sorts of food. The only thing they purchased rather than produced was mortadella.

Rural homes in Umbria had a classic outside staircase (loggia coperta, a term that dates back to the Renaissance) and a roofed balcony (balcone coperto) with a  view on two sides. That’s where the main entrance  (l’ingresso principale) was located.  Next to the stairs on the ground floor (piano terra) was a very important room: the cellar (la cantina), where food and wine were stored.

In the room underneath the balcony, my grandmother kept her newborn ducks (le nidiate di papere), which we called machine,  from maca, the  dialect word for oca (goose). She would feed  them with salad greens cut in very small pieces. When it was time to eat (l’ora del pasto), the ducklings followed her as if she were their mother.  I can almost hear her voice calling them.

Another classic part of a rural home in Umbria was a ceramic tile (mattonella di ceramica) with an image of the Virgin Mary with child (immagine della Madonna con il bambino) next to the staircase. It protected the house and all who lived within.

The main door opened to the biggest room in the house, which I recall as always being nice and warm (riscaldata). We would sit at both sides of a rectangular table (tavola rettangolare)–always the feminine form rather than the masculine tavolo because it was as h-u-g-e as a mother’s heart.  It stood in front of large fireplace (camino abitabile) where  I remember my aunt cooking dinner. Next to it was a container with wood  to keep the fire going. On the wall to the left was a small window, a stone kitchen sink and a ceramic tile that said “Cave Canem” (the  Latin equivalent of “Attenti al cane” or “Beware of the dog”), a reproduction of a tile originally from Pompeii.

On the left side of the fireplace was the room where my grandmother and her helpers (aiutanti)–daughters, friends,  in-laws, neighbors–would prepare large meals for special occasions. Here they kept what we called a mattera in the Umbrian dialect (madia in Italian), a wooden container for homemade bread.

From the main dining room there was a long hallway (un lungo corridoio), with all the sleeping rooms (camere da letto) on the right side. The master bedroom at the end of the hallway was the newlyweds’ room (camera degli sposi).  The only heat for all the sleeping rooms came from the stable (stalla) underneath them, which housed the milk cows (mucche da latte).

On the left side of the hallway was the bathroom (il bagno), which was large and simple and smelled like soap (sapone). My grandmother cleaned it by throwing buckets of water onto the floor. As simple as that!

When I was growing up in Italy, our great-grandmothers and grandmothers ran the world (comandavano il mondo). “Chi sta ai fornelli è il padrone di casa,” goes an old saying. (Whoever cooks is the leader of the family.) In Umbria, our women also had the keys to the cantina, which  made them the true leaders of house management.

However, there was a silent agreement with the men, who  were always welcomed and loved as the most important people in the family. It was a matter of diplomacy. And this  was how  women ruled during this sweet reign (dolce regno) of times past.

Roberta Niccacci, fluent in English, French and German, is an expat advocate in Umbria with a decade of customer service experience; you can contact her at robnic365@gmail.com.  Click here for more information on Umbria.