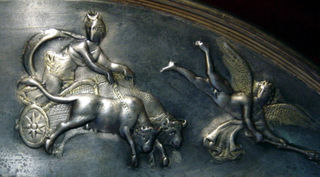 In the United States, my name is Dianne. In Italia mi chiamo Diana.  What difference does an Italian name make? As Diana,  pronounced Dee-ahn-aah, I wear my heels higher and my skirts shorter, eat leftover  tiramisu for breakfast and dance barefoot under the Tuscan moon.  All of which seems only  fitting since Diana derives from Divia or Diviana,  “la dea che illumina” (“the shining goddess”),   carrying the moon into the sky  in her chariot in this antique Roman relief.

Ancient Romans, like Marcus Tullius Cicero, called themselves by three names: a basic first name, a   clan  name and a family name that often arose  from a personal characteristic of an ancestor. The original Cicero, forefather of the famous orator, for instance, might have been a chickpea farmer or had a nose like a chickpea. Such a descriptive moniker,  once established, was handed down through the generations just as our last names are.

By medieval times, the latter two names disappeared, and people were called by only one name, which became confusing as the population grew and Marios and Marias multiplied. And so Italians began adding a second distinguishing label or surname (called a patronymic) to their names, sometimes with the prefix  “di” to mean “son of” or “da” for a town of origin, as in Leonardo da Vinci. The names given to babies abandoned on church steps told their
poignant stories: Orfanelli (little orphans), Poverelli (little poor
ones),  Trovatelli (little foundlings), Esposito (exposed, in the sense
of being  exposed to the elements) and Bastardo.

A short man became Basso; a red-head, Rosso; a big noisy guy, Cavallo (for horse).  Amiable ancestors blessed their heirs with names such as Belli (beautiful), Benamato (well-loved) and Bentaccordi  (congenial).  My “angels” in Rome, my first Italian friends,  were the aptly named Serafini (heavenly seraphim). Fortunately, I’ve managed to steer clear of clans such as the Bugiardini (little liars), Selvaggi (savages) and Pappalardi (lard-eaters).

Occupations inspired names such as Zappa or Contadino for farmer, Tagliabue for ox-cutter or butcher, Sarto for tailor,  Farina (flour)  or Forni (ovens)  for baker.  The Renaissance painter Alessandro di Mariano di Vanni Filipepi  gained fame as Sandro Botticelli (little barrels), a nickname based on his brother’s trade.

Names and occupations still go together, sometimes in humorous ways. An Italian website records the existence of:

For more on Italian last names: