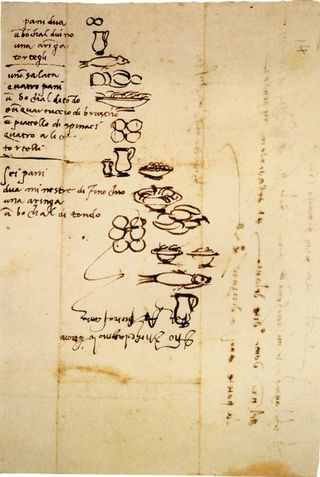 Michelangelo Buonarotti (1475–1564) left an indelible artistic and architectural signature on Florence and Rome. His genius exploded in youth and blazed into robust old age. Through almost a century of tumults—uprisings, assassinations, civil wars, sieges, conspiracies, and invasions—he battled with popes, broke with the Medici, and after the fall of the Florentine republic (for which he oversaw fortifications) railed against his fellow citizens. Yet he worked ceaselessly, producing unequalled masterpieces in painting, sculpture, and architecture and earning the accolade of Il Divino, the divine one. But Michelangelo drew more than capolavori. As this guest post explains, he used his talents in ordinary ways as well.

How to communicate if you don't speak or read a language? Draw it! (Disegnalo!)

Michelangelo, of course, knew this well. It was a common practice in the old days to hand-draw (disegnare a mano) items for the illiterate, such as Michelangelo's servant in this case.

I was still living in Florence when I embarked in an adventure to retrace Michelangelo's steps while I was reading The Agony and the Ecstasy by Irving Stone.

I learned much about il Grande Genio,including  that he was a humble and poor man (un uomo umile e povero). Paper was a necessity but also a luxury (una necessità ma anche un lusso) for him; therefore, it would never go wasted.

Michelangelo would save and recycle scraps of paper to draw and write on. He would also destroy his sketches (i suoi schizzi) as he wanted only his polished works to be seen. I don't think he would be happy to know that his grocery list has now gone viral on the internet!  Michelangelo had un caratteraccio, a temper, that's for sure! But that is what made him great.

Casa Buonarroti in Florence, an important museum, often overlooked by tourists, is where this document is archived. It was the house he had built after revolutionizing the world–and the final emotional stop on my tour.

As shown above, here is Michelangelo's illustrated list of fifteen grocery items, written in 16th-century Florentine:

*una aringa (a herring;a line like that over a letter or word stands in for an unwritten "n" or "m")

*tortegli (a type of tortelli)

I find illustrating or drawing vocabulary words very useful to be better able to memorize them. Are you a visual learner like me?

Mirella Colalillo was born to Molisani parents in Toronto, where she lived her early years. Her life changed when her family moved back to Molise. After living in Florence, Mirella recently decided it was time to return to Canada to "refresh" (literally!).Passionate about her Italian heritage and eager to show "la grande bellezza" through the eyes of the new Italian generation, the creator of the language and culture website "Parlate," hopes to inspire Italians and foreigners alike.