Michelle’s Bangs and Hair Styling in the Italian Language 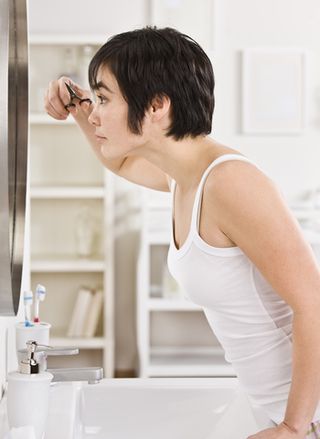 “How do you say 'bangs' in Italian?” my daughter, such a trend-setter that she’s sported them for years, asked. Dictionaries didn’t help. All they offered were translations of words like “explosion” (scoppio), “hit” (battere) and “slam” (sbattere).

The Italian media, covering the news as breathlessly as their American counterparts, used “frangia” (fringe, edging) and “frangetta” (a dimunitive form). Yes, even "bangs"–our odd English word for hair cut short over the forehead–sound better in Italian.  I was tickled to discover that “frangia” can also figuratively refer to “an embellishment of a story”—not that this one needed any.

“Io amo la sua frangia” (I love her bangs), the President was quoted as saying. “Sta bene, sta sempre bene” (She looks great, she always looks great.)
The First Lady celebrated her fortyninth birthday (quarantanovesimo compleanno) and her new look with dinner at Café Milano, a popular Italian ristorante in Washington, D.C. As always she didn’t have a hair out of place (non aveva un capello fuori posto).

Once the parrucchiere takes comb (pettine) and scissors (forbici) in hand, pay attention. You might want to give directions, such as:

*faccia la riga a destra — part it on the right

*faccia la riga in mezzo –- part it in the middle

If you're pleased with the results, say, “Mi sta bene.” (It suits me). You also can ask for advice with problems such as la forfora (dandruff) and le doppie punte (split ends).
If you have capelli that is grassi (greasy), secchi (dry), or crespi (frizzy), you may feel like mettersi le mani nei capelli (putting your hands in your hair in frustration).

If you're having a bad hair day–or worse–you may feel so fed up that you could say that you averne fin sopra i capelli (have it up to one’s hair) or so furious that you have un diavolo per capello (a devil for hair).
That might be enough to far rizzare i capelli a qualcuno (make one’s hair stand on end)—compresa la frangia (the bangs as well)!