MONA LISA: A Life Discovered has made its way to India! This review recently appeared in the Business Standard, India's leading business site: 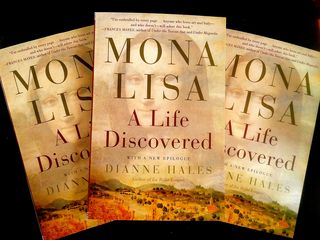 Mona Lisa: Behind the Portrait

She seduced the most famous Italian Renaissance artist and slept with the most powerful man in France. Her enigmatic smile earned her the epithet of "the sphinx of the Occident." But only after a highly publicised theft in the early 20th century did Mona Lisa earn her global fame and become the subject of tributes and ridicule, love and hatred.

Dianne Hales, veteran journalist and lover of all things Italian, seduces her readers with a captivating biography of Lisa Gherardini, the little-known subject of the most famous portrait in the world.

The life and history of the painting are not unknown. Scholars have more or less agreed that the subject is Lisa Gherardini, the wife of wealthy Florentine merchant Francesco del Giocondo, who commissioned Leonardo da Vinci to paint it. After working on it from 1503 to 1506, da Vinci, instead of giving it to his client, took it with him to France in 1514, when he accepted the invitation of King Francis I. When da Vinci died in 1519, Francis I acquired it, and it remained in the possession, though not always in favour, of the French monarchs till the revolution of 1789.

In 1800, Napoleon Bonaparte had the painting moved to his bedroom, where it hung on a wall for three years before moving back to the Louvre museum in Paris. Through much of the 19th century, the painting remained obscure outside the art world. But in 1911, Vicenzo Peruggia, an Italian employee of the Louvre, stole the portrait in a fit of misplaced nationalism and took it back to Italy. Investigations failed to recover it, and one of the initial suspects was Pablo Picasso, who was exonerated later. It was only in 1913 that Peruggia offered the painting for sale, resulting in its recovery and widespread coverage in the international media that finally led to its current fame.

Despite the unchallenged fame of her portrait, Lisa Gherardini has remained, as Ms. Hales writes, "the woman everyone recognises but hardly anyone knows." Ms. Hales's project is to find out the donna vera, or the real woman, behind the seductive smile. She is peculiarly qualified for this project. A frequent contributor to Ladies' Home Journal, Working Mother, Mademoiselle, Glamour and Good Housekeeping, her previous book La Bella Lingua: My Love Affair with Italian, the World's Most Enchanting Language, earned her an honourary Italian knighthood.

MONA LISA: A Life Discovered is not only a biography or art history. It is a recreation and reclaiming of an ordinary yet extraordinary life in the best tradition of feminist journalism. Early in her book, Ms Hales recounts how her curiosity about Lisa Gherardini was piqued and she decided to embark on the project that would take her all over Italy, to archives, experts and museums, and how she "relied on a reporter's most timeless and trustworthy tool: shoe leather."

We get the proof of this a few chapters later. Describing the walk Lisa's father Antonmaria would have taken on the day of her birth from Via Sguazza, where he lived, to Battistero di San Giovanni to get her baptised, Ms. Hales writes that the journey takes "about twenty to thirty minutes. I know. I've trekked it at different times and different seasons."

Ms. Hales's book is a master class for journalists, instructing them on the nature and extent of research necessary to write a book of such ambition. Its lucid narrative transports the reader to 15th century Florence under the sway of the Medicis, the bankers of Europe's emperors who bankrolled the Italian Renaissance; the Pazzi conspiracy; the threat of a joint invasion by the Papal and Neapolitan armies; its streets, shops, markets, churches and artists' workshops where an adolescent da Vinci mastered the sfumato technique.

Questions of gender and sexuality can never be too far from any contemporary discussion of art, especially that of da Vinci. As Ms. Hales writes, the question of whether or not da Vinci was homosexual is not important but how his sexuality influenced his art. An art historian tells Ms. Hales: "In Leonardo's eyes, she wasn't someone to be desired. He looked at her in a different way than other men. This may be one reason why he could see — and paint — Lisa Gherardini, not as an object or an ideal but as a fully realised human being." In hyper-masculine Florence, steeped deeply in the Medieval traditions of chivalry, this would indeed have been a unique perspective.

It is something Ms. Hales brings to her book as well. It reclaims Mona Lisa from the silencing the male gaze has confined her for centuries, making her the immortal muse but denying her all voice, agency and even history. Ms. Hales gives us Lisa Gherardini — a real woman.