MONA LISA is the BBC's Book of the Week. 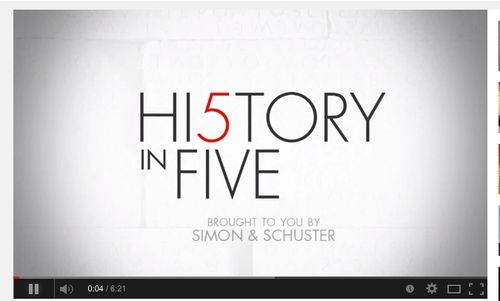 Simon & Schuster asked me to put together a video for its popular "History in 5" series. Here are five things you'll learn about Lisa Gherardini del Giocondo:

Lisa Gherardini was born in 1479 and died in 1542.  Yet although she lived her entire life in Florence, she is almost invisible in her home town. There are no streets or monuments that bear her name. To find Florence's most famous daughter, you have to go looking for her.

2. Lisa came from an ancient and noble clan–the Gherardini.

Legend traces the Gherardini as far back as ancient Rome. By the tenth century, they were living in Tuscany, lording over a wide swath of Chianti. Some became knights–although they were not like the gallant knights of Camelot. These robber barons would demand a high fee from merchants transporting goods to Florence across their lands. If the ransom wasn't paid, they would slice the donkeys' tendons and confiscate the merchandise.

The Gherardini were known for their fierce  bravery and independence.  Even after they lost their power and wealth, they never lost what they called their "Gherardini-ness."  Mona Lisa may well have inherited this strong sense of family pride and spirit.

This may not sound remarkable, but there weren't many choices available to women in the Renaissance. A girl either married or entered a nunnery. In order to win a suitor, her family had to offer a dowry. The Gherardini had lost much of the family fortune, but Lisa had another asset that may have attracted a merchant named Francesco del Giocondo: her beauty.

Women of Lisa's times were certainly not liberated. They had no legal rights. They could not own property or work outside the home. Historians have described Renaissance Florence as one of the unluckiest places to be born female. Yet women inspired some of the greatest works of art ever produced. You can see the nobility and strengh of their spirits in their portraits.  When you look at the Mona Lisa, you behold a woman who is strong, confident and competent.

Mona Lisa gave birth to six children–three boys and three girls–and was the stepmother of a son from her husband's first marriage. Two died in childhood, a son at the age of one month and a daughter at age two. Yet her two surviving daughters were not offered to suitors as potential brides.  Both were placed in convents.

We do not know the reasons why — probably a combination of factors. I visited the convent that Mona Lisa's oldest daughter entered. Even though it is now a military institute, it retains a sense of timeless tranquility. Perhaps in perilous times, a nunnery seemed a safer place for a girl. But  Mona Lisa's own religious faith may also have motivated her.  Many Florentine women expressed great piety and devotion and, when possible, made the same choice that she ultimately did: to be buried in a convent.

There's a certain irony in the fact that Mona Lisa, who would be adored by millions of men, chose to spend eternity in the company of women.

5. Leonardo da Vinci became attached to the portrait and kept it with him all of his life.

We know that Mona Lisa's  life intersected with Leonardo's in Florence around 1503. She was 24 at the time and had just given birth to a second son. Leonardo was 51 and a venerated artist who had to flee from Milan, where he had been working for eighteen years, after the French invaded.

Leonardo may have initially taken the commission to paint the portrait solely for the money. He had lost his patronage and needed income. However, I think something in Mona Lisa–perhaps her Gherardini spirit–must have intrigued him. We know that he kept the portrait with him until his death in the Loire Valley in France in 1519.

Dianne Hales is the author of MONA LISA: A Life Discovered and LA BELLA LINGUA: My Love Affair for Italian, the World's Most Enchanting Language.   Read more at her blog "Discovering Mona Lisa."

← The Five Worst Things That Happened to MONA LISA A Book Brahmin Interview: The Other Books in my Life →
FOLLOW BY RSS