Music in the Italian Language 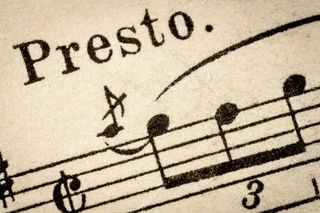 The Italian of Music, the Music of Italian

Music, the theme of this year’s Settimana della Lingua Italiana (Italian language week), has echoed through Italy since the time of the Etruscans, whose flautists lured game into hunters’ nets with enchanting melodies. Italians did more than make music, however: they invented it.

Almost 1000 years ago an Italian monk named Guido d’Arezzo created musical notation, using syllables (do-re-mi) from the initial phrases of a hymn to St. John the Baptist. The ingenious Benedictine marked different pitches on his fingers and palm and used “the hand of music” (la mano della musica) to teach musicians how to play.

In the 1500s another cleric, Filippo Neri, organized presentations of Bible scenes accompanied by music in a hospital prayer room, or oratory, to raise money for the poor. Soon all of Rome was flocking to this new form of entertainment, which became known as an oratorio.

In the late sixteenth century, a group of Florentine scholars and musicians called La Camerata dedicated themselves to the lofty goal of setting Greek myths to music. The story of Daphne, the Greek maiden transformed into a laurel to escape Apollo’s pursuit, debuted in 1597. The delighted audience in the Palazzo Tornabuoni had no idea they were hearing the world’s first dramma in musica. In the following century, Italian composers wrote almost a thousand operas.

Neapolitan popular music dates back to a song-writing competition in 1835. "Te voglio bene assaje" (I love you so much), the winning love song, remains popular, but the real passion in le canzoni napoletane (Neapolitan songs) is for the sun, the sea, and Naples itself.

The most famous Neapolitan singer, Enrico Caruso, a poor scugnizzo (street urchin), hired himself out in his teens as a musical Cyrano de Bergerac, belting out ballads from behind tone-deaf suitors as they pretended to serenade their sweethearts. Long after he became the highest paid singer in the world, Caruso would sing classic Neapolitan songs as encores after his concerts.

L'Accademia della Crusca, the bastion of the Italian language, is distributing a free electronic book, L'Italiano della musica nel mondo (The Italian of music in the world) to commemorate this week's theme. Click here to download a PDF.

By coincidence, I just received an e-mail from a musician extolling Italian's significance as the international language of music. Grazie, Rick Giovinazzo, for this:

"For serious and studied musicians and lovers of "Western" music within every country of the world, Italian is an essential language without knowledge of which it would be impossible to read (and fully appreciate) le partiture (the scores) of so many of the greatest western composers ever to have lived.

"We find in great abundance the use of piano and forte or pianissimo and fortissimo; morendo, sforzando, crescendo and rallentando; espressivo, focoso, contabile and marcato. For strings alone there are pizzicato, spiccato, saltando, arco, sul tasto, sul ponticello and sul G (play only on the "G" string)…

"Because of the centuries-old tradition of utilizing Italian as the official universal language of music…many thousands of musicians and music lovers from within every country of the world, in at least a small way, understand and utilize this great language."

A cappella -– sung “in chapel style” with no instrumental accompaniment