Shipwrecked in the Italian Language 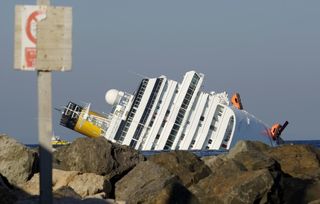 The sight of a huge cruise ship (nave da crociera) lying on its side (su un fianco) in the water, as if sleeping (come addormentata), was startling enough. But I immediately recognized the island (l’isola) in the background: Giglio, part of the Tuscan archipelago (arcipelago toscano) in the Tyrhennian sea (il mar Tirreno).

I’ve spent many happy days swimming and sailing in these beautiful waters, but I also have been warned about their dangers. Seafarers along the rocky peninsula of Monte Argentario say “C’è mare” (literally, there’s ocean) when the sea is rough (mosso). Combined with a tug at the lower eyelid, the phrase also implies, “Watch out. Pay attention.”

Even a lupo di mare (sea wolf, or expert mariner) needs more than a bussola (compass) to navigate these waters safely. In a guide for marinai (mariners) in the area, I found warnings of scogli isolati (scattered large rocks) that are “poco visibili con mare mosso” (barely visible in high seas).

According to news reports, the Costa Concordia ha urtato uno scoglio (collided with a large rock), causing a huge squarcio (gash), and imbarcava acqua (was taking on water). To date,eleven people are known to have drowned (annegati), and others remain missing (dispersi).

“Quella roccia non è sulle carte nautiche.” (That rock is not on the nautical map,” said the captain, who was arrested and charged with omicidio colposo plurimo, naufragio e abbandono della nave (multiple manslaughter, shipwreck and abandoning ship.) Members of the crew (l’equipaggio) have accused him of “osare troppo” (venturing too far) from the designated route.

Over the years the sea's harsh lessons about life’s dangers have made their way into the Italian language. Urtare (to collide with), for instance, can also mean “to run afoul of.” Essere in urto means “to be on bad terms”; mettersi in urto con qualcuno, “to fall out with someone.” Naufragare (to be shipwrecked) can also be used figuratively as “to be ruined” or “to flop.” In the sense of a “total ruin” or a “wreck,” a naufragio can happen anywhere and leave you affogato nei guai (overwhelmed by troubles).

Navigare in cattive acque (sailing in bad waters) is the Italian equivalent of skating on thin ice. If you find yourself in this predicament, don’t tirare i remi in barca (draw the oars on the boat, or give up). But if you hear the cry “Scialuppe a mare!”, it’s time to launch the lifeboats. And remember: In tempo di tempesta ogni buco è un porto. (Literally, in stormy times, every hole is a port—or, as English speakers say, any port in a storm.)

andare a picco or andare a fondo –- to sink

Dianne Hales is the author of LA BELLA LINGUA: MY LOVE AFFAIR WITH ITALIAN, THE WORLD'S MOST ENCHANTING LANGUAGE.