“My Little Potato” and Other Endearments in the Italian Language

I'm honored that "Becoming Italian Word by Word" has again been nominated as "Best Arts & Culture Blog" by ITALY Magazine.   Click here and scroll down to vote, per favore. Grazie mille! 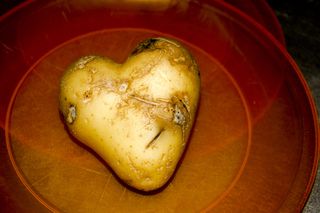 In her ever-charming “French Word a Day” blog, author Kristin Espinasse recenty noted that “the French, widely regarded as one of the most sophisticated and beautiful people on the planet, use some of the most strange (and not so beautiful) terms to refer to their belle/beau, or loved one." Cases in point: ma puce (my flea) and mon chou (my cabbage),

Italians do the same—as I learned years ago when I saw a young man passionately embrace una bella ragazza (a pretty girl) whom he called “la mia patatina.”

“Did he just call her his little potato?” I asked. A Facebook friend has since explained why: La patata cotta bene diventa morbida e gustosa (The potato, cooked well, becomes soft and tasty).

Some Italian vezzeggiativi (pet names) are simply diminuitivi, shorter forms of a given name, such as Vale for Valentina, Lele for Raffaele, Eli for Elisabetta, Pippo for Filippo or Cri for Cristina.  Or they may be playful variations on a name:  Peppino, Beppe, Peppe or Peppuccio for Giuseppe,for instance, or Nina, Vanna or Vannina for Giovanna. Also popular are suffixes such as Stellina for Stella and Renzetto or Renzuccio for Renzo.

Children’s behavior inspires nicknames such as Saglienne (Climber), Chiacchiere (Chatterbox) or Ercolino (Little Hercules, for a strong boy). A friend scampered so much as a child that her family dubbed her Capretta (Little Goat). When we  spent a summer in Italy years ago, our young daughter earned a pet name of her own: Coccolona (Cuddly One).

So the next time you want to woo your darling with sweet nothings,  you might try whispering some of these:

And what does a patatina (little potato) call her romantic partner?  Cipollino (little onion), of course!

Il molleggiato –- springy, bouncy, a nickname for Adriano Celentano , a popular Italian singer in the 60’s and 70’s

Click below for a classic song about a woman nicknamed Bocca di rosa (mouth of a rose), who moved to a small village and shared her love with all the men, married or not.  The angry townswomen teamed up and convinced their priest to send Bocca di rosa away.